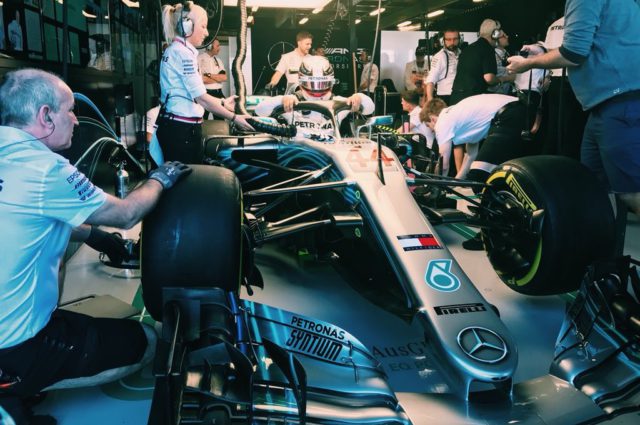 Lewis Hamilton led a Mercedes one-two in the first practice session of 2018, as he and teammate Valtteri Bottas set the pace in Australia on Friday.

However, with rivals Red Bull and Ferrari not utilising the quickest ultrasoft tyres for their fastest runs, the true extent of the world champions’ advantage – if indeed they have one – remains to be seen.

Hamilton vied for the top spot with Bottas and Red Bull’s Max Verstappen in the middle stages of the session, eventually 0.551s quicker than the rest of the field on a 1:24.026 on the ultrasoft tyre.

As the Silver Arrows clocked their best times on the purple rubber, with Hamilton half a second up on Bottas, Max Verstappen took third for Red Bull, his supersoft-shod lap leaving him seven-tenths adrift of P1.

Kimi Raikkonen, on softs, led the Ferrari charge in fourth, from teammate Sebastian Vettel and the second Red Bull of Daniel Ricciardo.

Williams rookie Sergey Sirotkin had the honour of setting the first time of the year, though the Russian almost had the first accident too when he subsequently brushed his FW41 against the wall when entering the pit lane.

Toughest start to the season? That had to be McLaren – or so it seemed initially. Fernando Alonso was the last man to set a time after exhaust issues, and he and teammate Stoffel Vandoorne completed just 31 laps between them.

However, once on track Alonso quickly hinted at his Renault-powered car’s true potential, rapidly leaping into the top ten. The Spaniard ended up an encouraging eighth, with Vandoorne backing him up in tenth.

Haas proved just as quick as predicted after pre-season testing, with Romain Grosjean’s seventh place making the American squad ‘best of the rest’ behind the leading three teams. And completing the top ten were Renault, courtesy of Carlos Sainz in ninth.

Hamilton’s title defence begins with the top time in the first session ?

Magnussen: I think everyone will get to grips with the new circuit very quickly

Verstappen not sure if there is still a title battle