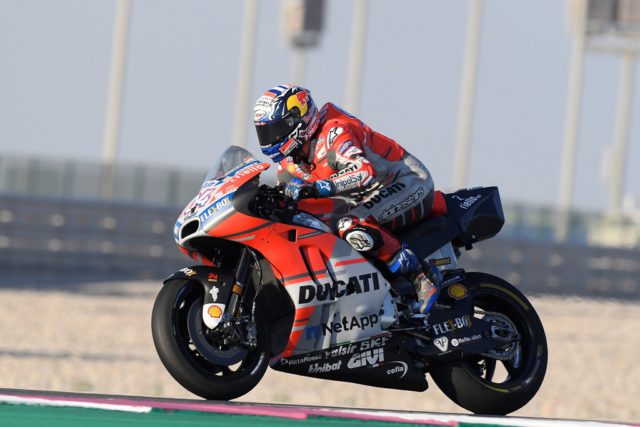 Andrea Dovizioso was fastest in both free practices for the Qatar Grand prix, first round of the 2018 MotoGP championship. The Ducati’s driver best time was 1:54.361min. His teammate Jorge Lorenzo was fourth in the standings.

It was like a Saturday qualifying session at the end of FP2 ?

Here’s a look at the times and that all important Top 10 ⏱⬇️ pic.twitter.com/15Zhp8CYtC

“I am very pleased with what we have done today. We had some very good feelings during the tests and I am happy to have confirmed that feeling. The position is very good but it is clear that we have not yet done anything: we will have to fight tomorrow”, he commented.

“It’s nice to come back here, and this time for the race! In the morning the track was different to how it was during the test. There was a lot of dust and not much grip. In the evening session, however, the track was fine and I had the same sensations as in the test we did here a few weeks ago. Tomorrow we have to keep working with some small details that I believe we can still improve”, Rins explained.

What an end to the opening day of the season ?@AndreaDovizioso heads the times from @Petrux9 and the impressive @Rins42 #QatarGP pic.twitter.com/POPVaC9Z52

“We are happy enough with how this first day in Qatar went in general. We had the first contact with the track and had the chance to see if we were getting the same feeling we had during the test. Actually the track has changed compared to the test and we now have to adapt the setup of the bike in order to make the tyres working well. Tomorrow we will see if we can get closer to the riders that are ahead of us who, at the moment, seems to have something more”, Marquez said.

Bottas fastest in FP2 at Monza, Ferrari closes on Mercedes