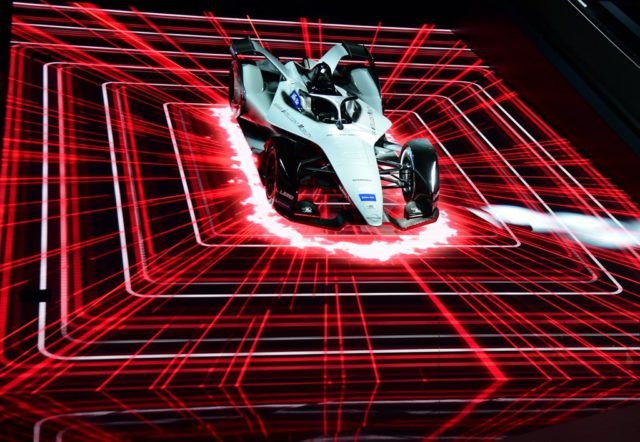 Nissan has taken the next steps toward its debut in the all-electric ABB FIA Formula E Championship. The brand revealed its concept livery at the Geneva Motor Show. 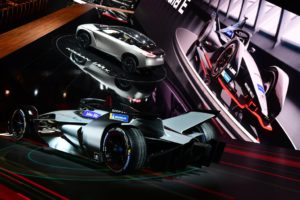 At last year’s Tokyo Motor Show, Nissan announced it would debut in Formula E from season five. Now Nissan unveiled the colour scheme for its car, which features striking new aerodynamics. The car also has an entirely new battery and powertrain package.

The livery for the brand’s Formula E program was designed by Nissan’s Global Design team in Japan.

Unveiling our @Nissan @FIAFormulaE concept livery this morning at the #GIMS2018. Counting down the days until our series debut for season five. #Nissan #FormulaE pic.twitter.com/LPoVktZeiC

“At first glance, the season five Formula E car looked to our design team like an EV-powered supersonic bird in flight,” said Alfonso Albaisa, senior vice president of global design. “Naturally this initial reaction from the team started us on a path that captured a sense of a form breaking free of resistance and gravity. Formula E racers are virtually silent, with explosive speed bursts thus naturally we turned to Doppler when designing the livery. The combination of the sonic pulse of the Doppler effect and the released power of a sonic boom inspired our celebration of EV Racing!” 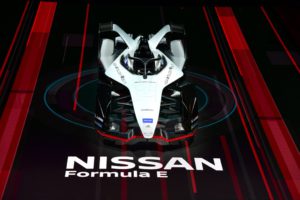 It also eliminates the need for the mid-race car swap which has been used in the first four seasons of the championship.

“Nissan is proud to be an innovator in electric vehicles on the road with the Nissan LEAF completing more than four billion zero-emission kilometres around the world. Now, we want to bring that EV expertise to motorsport,” said Chief Performance Officer Jose Munoz.

“We’re very excited to reveal the livery for our debut. The ability for Nissan to use this championship as a key development platform for our EV technologies and to be able to race in major city centres around the world makes it a perfect vehicle for us to showcase Nissan Intelligent Mobility.”

Meanwhile, work has been underway on developing the all-new technical package for many months.

Nissan is working with its partner Renault to leverage expertise and development already available. That keeps the Renault-Nissan-Mitsubishi automotive partnership’s focus on collaboration and maximizing synergies in order to boost competitiveness.

“Nissan is bringing a lot to the table with our expertise in EV technology for the road and bringing it to the race track,” said global motorsport director Michael Carcamo

“The level of competition in the Formula E championship is on the rise. And we’re eagerly awaiting the unique engineering challenge ahead. We’re entering the championship on a level playing field this year. Every manufacturer will compete with a brand new car, battery and powertrain combination from season five.”

There will be announcements on the program and the brand’s drivers later this year.

Hamilton: I lost maybe half a tenth in the last corner

Michelin expecting a promising start to the MotoGP season