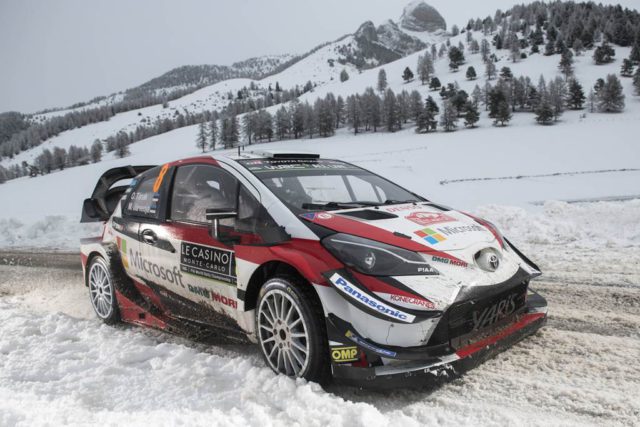 Sébastien Ogier is just four speed tests away from a home victory at Rallye Monte Carlo, first round of the 2018 World Rally Championship (WRC). But the Frenchman will need to hold his nerve in the Sunday finale after impressive Toyota debutant Ott Tänak kept him on his toes throughout Saturday.

Ogier and Tänak began leg three of the season curtain-raiser separated by just under 15 seconds. Although the Frenchman had more than doubled that advantage come day’s end, the figures do not paint the full picture of a see-saw scrap that at one point saw him more than a minute clear.

The M-Sport man produced a virtuoso performance on the SS9 opener. He maximised his favourable road position in treacherously snowy conditions to extend his lead over Tänak to 1min 18.4sec. But then the Estonian fought back.

Fastest on both SS10 and SS11 – notwithstanding an excursion into a field – by the time the cars headed back to evening service, the gap between the pair was just 33.5sec.

“Losing six seconds (to Tänak) on SS13 was what we had allowed for. I wanted to have at least 30 seconds in hand tonight, and that’s what we have,” reflected Ogier.

“We perhaps didn’t make the perfect tyre choice for today’s final stage – it was very dirty and we were a bit on the limit – but it’s ok.”

Tänak’s Toyota team-mate Jari-Matti Latvala briefly flirted with second spot himself – closing to barely 20 seconds shy after SS9 – before falling away and settling into a solid and lonely third place. The Finn’s cause was aided when Hyundai rival Dani Sordo crashed out of a podium position.

Latvala overhauled compatriot Esapekka Lappi in another Yaris as he moved up the order, with the younger Finn falling behind Britain’s Kris Meeke when a mistake precipitated a puncture on SS11.

Lappi spent the remainder of the day playing catch-up. His dogged determination paid off as he narrowly reclaimed fourth spot from his Citroën rival on the final stage (SS13).

Bryan Bouffier has slipped to eighth ahead of Citroën’s Craig Breen, who suffered for being the ‘road-sweeper’ through the snow of SS9. WRC 2 pace-setter Jan Kopecky completes the overall top 10.

On Sunday, crews will tackle two identical loops of two stages totalling 63.72km in the steep Alpes-Maritimes hills. These include the legendary Col de Turini and the points-paying Power Stage. There will be no service break in-between.

Citroen sets conservative targets for its crews in Finland