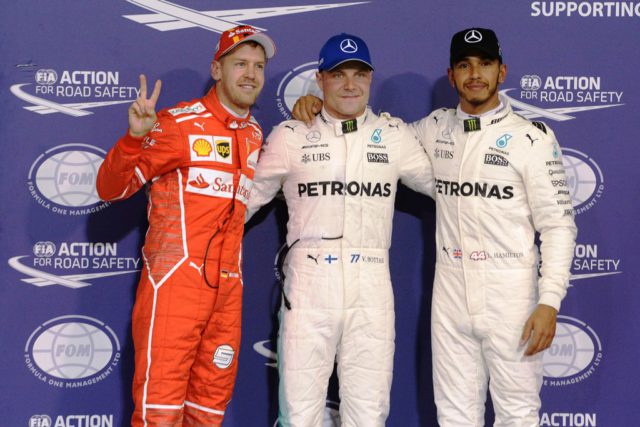 Valtteri Bottas and Lewis Hamilton secured the 50th front row lockout for Mercedes in F1 as the 2017 season goes into its final round.

Valtteri claimed his fourth career pole position – his first at the Yas Marina Circuit and fourth of the 2017 season. Lewis will start tomorrow’s Abu Dhabi Grand Prix from P2 on the grid.

“It’s only the fourth pole of my whole career and I had to beat some pretty good qualifiers, so it’s a great feeling to start from P1 tomorrow. It was a really good qualifying, clean and smooth. With the changes we made, the car was behaving much better in qualifying than it did in free practice. Run after run, I could always find some time here and there, I really worked on the details.”

“But the weekend is not over yet; we want to finish strong tomorrow as well. We were nearly there in Sao Paulo and now I get a second opportunity. It would mean a lot to end the season on a high. However, no matter how tomorrow goes, it will be nice to head into the winter break knowing that I had the speed to be on pole two races in a row. That’s a good feeling and a good basis to start working for 2018.”

What. A. Lap!! The #FastFinn cold as ice out there!@ValtteriBottas, take a bow… That’s #AbuDhabiGP pole! https://t.co/R4MgBtnV96

“Congratulations to Valtteri, he did a fantastic job in qualifying. It’s good to see him performing at this level, particularly at the end of the season which puts him into a great position for next year. For me, practice was great. Then I made some changes in anticipation of the track cooling which I think were not the right ones in hindsight. But it was good to experiment a little which I hadn’t really done all year long.”

“However, that’s why I struggled a little bit with the balance in qualifying. I think in the end I was up about a tenth and a half out of Turn 1, but then I lost it somewhere else through the rest of the lap. Nonetheless, it was fun to be out there, challenging in the last qualifying of the year. Now we can get on with the race tomorrow. It’s a very hard track to overtake, but I will give it everything for sure.”

Belgian GP: “Spa belongs to those who dare!”