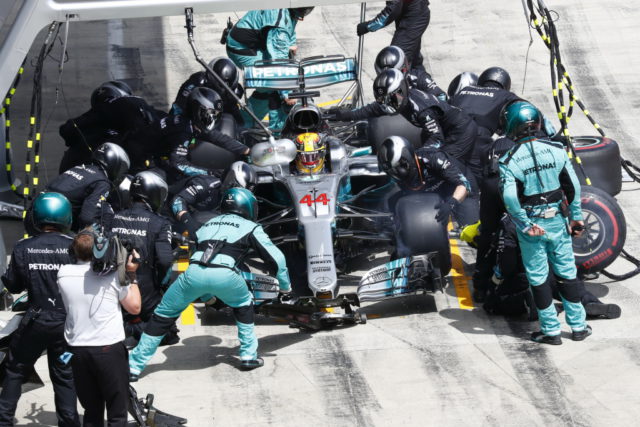 There’s perhaps no better visualisation of Formula One as a team sport than in a pit stop, as the crews swarm around their cars, a blur of motion, teamwork and absolute precision in a split second. And this year, the Mercedes Silver Arrows crew have proven themselves the best in the business, winning the DHL Fastest Pit Stop Award for the very first time.

The award, introduced in 2015, recognises the outstanding teamwork and performance of the most consistent crew in F1 over the course of a season

It’s an accolade for the unsung heroes who make those critically important, race-deciding stops happen.

This couldn’t have been achieved without a huge effort from the pit crew and a concerted push by the team to develop and improve its equipment and techniques over the last few years in the drive to have the most consistent stops in Formula One. What good is one stop at 2s, if the rest are at 3s? The perfect pit stop is not about chasing records – it’s about consistency.

Much of the groundwork that sealed the award was laid over the winter months, as the race team returned to work after the Christmas break. Practice for the new season started almost immediately, with three programmes of 20 practice stops per week to get them back in the groove.

The crew work through 15 stops a day from Thursday to Saturday of each race weekend, followed by five or more final equipment checks on a Sunday morning. With one race still to go, the team have completed an astonishing 891 practice stops this year so far.

It took the crew just 9.1s to swap Lewis Hamilton’s damaged nose and replace a punctured tyre in Mexico, as he set off after Sebastian Vettel on his way to the title. Stacking cars – stopping both Lewis and Valtteri Bottas one after the other on the same lap – is another high-pressure moment, which has occurred five times this year for a total of 10 stops. Include a five-second penalty for Lewis in Bahrain and the headrest incident in Baku and that’s a lot of stops.

The quality of the competition in recent years has forced every single team to raise its game. If every team can regularly target a low 2s stop, there is extra pressure to be quick. It also pushes teams to develop. With the margins shrinking year by year, there is a bigger emphasis on consistent, clean stops.

This has been the mission of the Mercedes crew for 2017

The team clocked a scorching 2.35s stop for Lewis at Spa – but it was the Williams crew that saw the fastest pit stop recorded this year, as they pulled off a 2.02s time for Felipe Massa at Silverstone.

Measured across 49 stops in 19 Grands Prix, the Silver Arrows have recorded the fastest pit lane time of the race an impressive nine times this year and the best stationary stop six times. But, most impressive of all, the team has achieved the best average time for both cars through the pits on 12 occasions over the course of the season. The team has ranked in the top three average times on 17 occasions, missing out just twice all year – specifically in China and Bahrain, which were both the result of equipment failure. In simple terms, no team was more consistent through the pit lane in 2017. 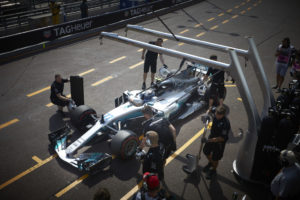 To demonstrate just how competitive the battle to be the best in the pit lane was this year, the median for all 10 teams ahead of the final round was 3.1s, with a mean time of 2.9s

Ferrari came in fourth, just shy of Red Bull. Haas edged Toro Rosso into P5 – but both teams were close to the overall average.

Remember, this is all achieved under the greatest of pressure. That is an ever-present in Formula One – but when your cars are running at the front, there’s everything to lose by getting it wrong. A pit stop gone wrong is always news but a smooth stop is rarely given much attention. Unless it serves to directly vault a car ahead of a rival. Even then, it’s a matter of expectation that the stop should be a good one.

In the pursuit of excellence, mistakes can happen – likewise equipment failures, as experienced by the team in China and Bahrain. Fortunately, the strategy department and Design Office support closely the crew’s work. The Design department, for example, made the in-house the front and rear jacks.

And if one of them fails, such as it did in China, the analysis is as serious as of any part of the car. Every single stop is a learning experience. Each member of the crew has an input into the process of the stop and they are all provided with constant feedback, led by data-driven analysis from the strategy team.

Monza was a supreme team performance. Lewis and Valtteri wrapped up a famous 1-2 at the home of the Scuderia, while in the pits the crew clocked the two quickest pit stop times in the box. They were a 2.33s and a 2.15s respectively.

In Singapore, under immense pressure to capitalise on the early accident that eliminated the two Ferraris, the Silver Arrows pit crew took just 2.27s to turn Lewis around as he pitted from the lead ahead of a prowling Daniel Ricciardo. Those Red Bull boys were fast. But the Mercedes crew in black was faster and Lewis emerged once more in the lead.

After a long season, this award is clearly the icing on the cake for the crew

Especially for those who have put the work in over the last few years to ensure the team has the most consistent stops in Formula One. It’s an accolade that everyone in the pit lane wants to win and, in such a competitive arena, those top five or six teams will all be gunning for the crown in 2018. Expect every crew to be pushing hard to shave another 0.2s off their average time over the winter months…

On your marks, boys!

Pays to be prepared for EVERY eventuality!!

Hulkenberg can’t wait to see and try out the new Renault R.S.19