Hyundai Motorsport has been on impressive form throughout the opening day of the 2017 FIA World Rally Championship (WRC) season finale in Australia, claiming a clean sweep of stage wins. Andreas Mikkelsen leads the rally by over 20 seconds after eight of the weekend’s 21 stages with his teammate Thierry Neuville chasing in second overall. Hayden Paddon, in the third of the Hyundai i20 Coupe WRC cars, holds seventh at the end of Friday.

Road position has been a factor on the famously dusty Australian gravel roads with Neuville, second in the Championship, one of the first to tackle the stages. Friday’s itinerary has covered a repeated loop of three tests – Pilbara (9.71km), Eastbank (19.05km) and Sherwood (26.68km) – as well as two runs through the 1.27km Destination NSW Super Special Stage in the early evening.

Winners of Rally Australia twelve months ago, the Norwegian crew of Mikkelsen and Anders Jæger immediately picked up where they left off in 2016

“It has been a very good start to the rally, bringing back memories from our win last season. I have had a clean drive throughout the day with no mistakes and with an incredibly positive feeling from inside the car. It really felt like home! I have focused on increasing the lead wherever possible and 20 seconds is a nice gap. Our challengers will be closer to us on the road tomorrow, so we have had to make the most of our advantage today. Things really couldn’t have gone any better. The weather forecast suggests we might have some rain this weekend, and there are some long stages on the itinerary for tomorrow. For now, though, I am happy with how things have started”, Mikkelsen said. 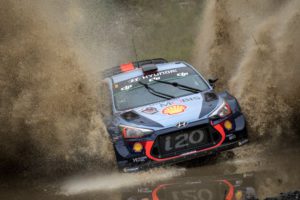 “We have had a promising first day”, Neuville commented.

“The conditions on the stages were quite tricky with lots of loose gravel, which meant a bit of cleaning for those earlier on the roads. All of the stages went pretty well from my point of view and I am generally satisfied with our position. We struggled a bit with the soft tyre in the longer afternoon stage (Sherwood II), which prevented us from pushing as much as we’d like, but we were still able to set a decent pace. It’s a very close battle for second with Kris [Meeke], while Andreas is looking very strong out in front. We are in a more favourable road position tomorrow so I am definitely up for the fight.” 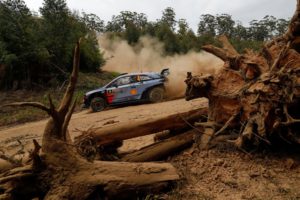 Paddon and co-driver Seb Marshall have endured a trickier start to the final rally of the season, battling to seventh overall

Fourth place in SS5 (Eastbank 2) showed some signs of encouragement for the duo with 13 stages still to run this weekend.

“So far, things haven’t quite clicked. There is no apparent reason; we just haven’t been able to get into the all-important rhythm”, Paddon explained.

Petter Solberg: I want the win, but I won’t risk everything for it

Maserati is the main partner of the Gran Premio Nuvolari 2018