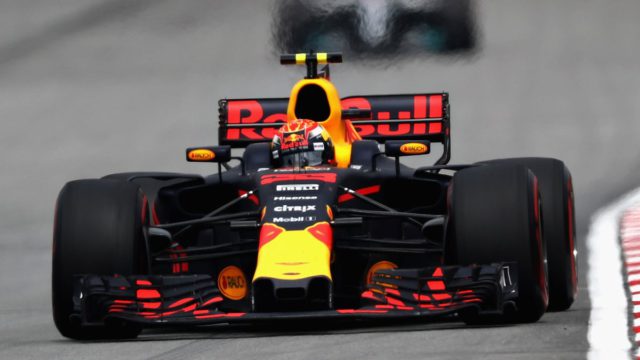 Max Verstappen recorded victory with a dominant drive at the Malaysian Grand Prix after an early pass on Lewis Hamilton. While Daniel Ricciardo fended off a recovering Sebastian Vettel for third.

Verstappen passed Hamilton during the early stages of the race and controlled the remainder of proceedings to triumph. Ricciardo secured a double podium for Red Bull.

Vettel put in a fine recovery to fourth, having briefly threatened Ricciardo. But he was involved in a bizarre post-race collision with Williams’ Lance Stroll, leaving his Ferrari with substantial damage.

Hamilton retained the lead on the opening lap with his cause aided by Kimi Räikkönen failing to make the start, after Ferrari diagnosed an engine problem en route to the dummy grid.

Ferrari attempted to address the issue on the grid but with 10 minutes to go opted to wheel Räikkönen back to the garage, and the problem was deemed irreparable.

As a result, Verstappen emerged as Hamilton’s primary contender off the line, though had to put up a robust defence against fast-starting Valtteri Bottas, who overhauled Ricciardo on the run to Turn 1.

Hamilton and Verstappen soon broke clear of the Bottas/Ricciardo squabble, with the Mercedes driver complaining of engine de-rates on his W08.

Verstappen remained glued to the rear of Hamilton’s car and as the pair began the fourth lap, the Red Bull driver moved out of the slipstream and dived to the inside into Turn 1.

Hamilton did not fight back, and Verstappen soon pulled clear to escape DRS range, as Ricciardo battled Bottas for third place.

On lap nine the pair ran side-by-side through the first sequence of corners before Ricciardo made a move stick up the inside at Turn 4, as he grabbed third position.

The order among the leading trio was maintained through the pit stop phase, though Bottas slipped behind the recovering Vettel, as the Finn’s woeful weekend continued.

Vettel, running the alternative Soft/Super Soft strategy, moved up to 13th on the opening lap. He started 20th, after engine problems in qualifying. Seb gradually worked his way forward via a combination of on-track moves and midfield rivals pitting. He emerged from his sole stop in a net fourth, 14 seconds behind Ricciardo.

Vettel carved into Ricciardo’s advantage and on lap 49 made a half-hearted attempt into Turn 1, but the Australian held the inside line to preserve his position.

That was as close as the pair came to swapping positions, as Vettel slipped away from Ricciardo during the closing laps.

Ricciardo, in turn, had been drawing in towards Hamilton after the pit stop phase. But the Red Bull driver’s challenge soon wilted in the wake of Vettel’s charge. This left the Briton safe in second.

Up front, Verstappen was never challenged after his initial pass on Hamilton. And he put in an accomplished performance to register the second victory in F1.

Hamilton, Ricciardo and Vettel followed. But the Ferrari driver failed to make it back to the pits. He had an unusual incident on the slow-down lap with Stroll, who classified 8th.

As the pair rounded Turn 6, Vettel and Stroll came together, with the SF70-H sustaining substantial rear-left damage; Vettel parked his car and hitched a lift back with Pascal Wehrlein.

Bottas have been jumped in the pit phase by Vettel. He tumbled away from the fight and trailed home a lacklustre fifth. Sergio Pérez completed an early move on Stoffel Vandoorne to take sixth position. While the McLaren driver equalled his best F1 result in seventh.

Stroll, prior to the aforementioned Vettel clash, beat Williams team-mate Felipe Massa to log eighth. While Esteban Ocon collided with Carlos Sainz Jr. before recovering to round out the top 10.

Ocon attempted to pass the yet-to-stop Toro Rosso driver around Turn 1. However, the pair brushed wheels, resulting in Ocon spinning and dropping to 12th, from where he recovered to 10th.