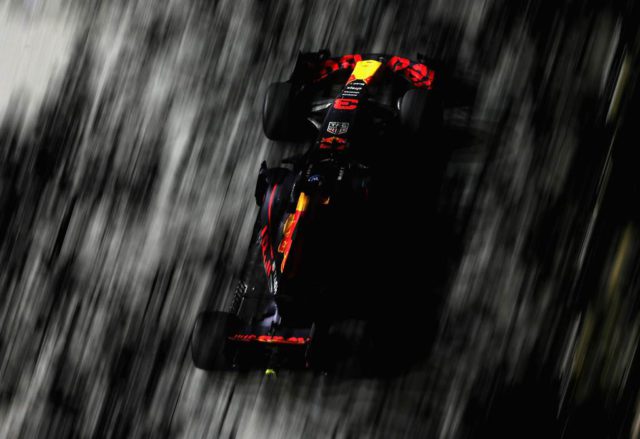 Daniel Ricciardo was fastest in the Friday free practices before the Singapore Grand prix. His Red Bull teammate Max Verstappen was second, while the Mercedes drivers Lewis Hamilton and Valtteri Bottas were third and fourth.

“It was a good day out there today, but I expected this, to be honest, and am not really surprised with our performance. I knew we would come here with a good car. We made some progress from the morning and even though we were the quickest in FP1, I still wanted to get more out of the car and the set up in the afternoon. We took another step forward throughout the day, which was good and we now hope there is still more room to improve for tomorrow.”

“I’m after a dominant weekend and so far this has been a good start. It’s important that we obviously keep that for tomorrow but I have faith that we can perform on this level all weekend. I know the challenge in Qualifying will be a potentially stronger Ferrari and Mercedes but I’m confident we can stay up there and fight with them at the top.”

“Finishing first and second in the last session means it has been a positive Friday. The car in general performed well so we are happy with that side, the balance can always be improved and we are a bit down on top speed but nothing major to work on. After such a good day we have to believe that a very good result in Qualifying is possible, so we will go for it. Compared to our competitors we look very strong, we didn’t expect to be this competitive so of course this is very pleasing for us.”

“We still have to be cautious and work on all aspects because we know that in Q3 tomorrow they will have improved and be closer; for now we look in a good position. Qualifying will be tight but I’m confident that our race pace offers us the chance of a good result. We know this should be one of our best tracks so we will do our best to capitalise on that.”

“We had a clean day and got through our sessions without problems. It was pretty hot out there, the conditions are pretty awesome to cope with, but the grip on the track is fairly good. We were obviously close with the field today and we have still got some improvements to make with the car. Red Bull seem like they’re very strong and they’re thereabouts with Ferrari, so we’ve got some work to do. But nothing is out of reach.”

Double delight for @danielricciardo as he tops the charts for the second time in one day#SingaporeGP pic.twitter.com/SOymCYZq2u

Vettel on pole position in Baku

Vettel fastest in the wet in FP3 in Australia