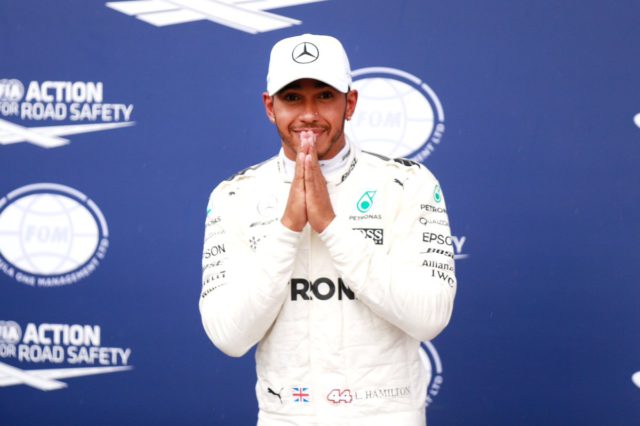 Lewis Hamilton took a record 69th pole position during qualifying for the Italian Grand Prix, which was delayed several times amid persistent rain. Lance Stroll set to start on the front row, after penalties.

Despite poor weather conditions through Saturday morning, qualifying got underway as planned, at 14:00 local time. However, in tricky conditions, particularly on the pit straight, Romain Grosjean dramatically lost control of his car and crashed.

Race Control immediately threw the red flags and, following Grosjean’s claim that it was the “wrong call” to start qualifying, the paddock experienced a series of delays. From 15:05 to 17:40, the track was silent, as rain eased off, intensified and eased off again.

Some two hours after the red flag, a tractor was sent out to clear water from the main straight. Marshals also gave air blowers at particularly wet sections of the track.

Eventually, the circuit was safe enough to resume qualifying. There were no further delays occurring through the remainder of Q1, and the following Q2 and Q3 phases.

After a drier spell, rain began to fall again ahead of the pole position shootout, forcing all drivers back on to Wets, the Intermediates having appeared in the restarted Q1 and in Q2. Red Bull took the challenge to Mercedes, with both Verstappen and Ricciardo spending phases on top, only for Hamilton to storm clear with a stunning final lap, a second faster than anybody else.

Verstappen and Ricciardo will drop down the order, though, due to penalties. Williams rookie Stroll starred to grab fourth, ahead of the similarly impressive Esteban Ocon (Force India), both getting the better of Mercedes’ Valtteri Bottas.

Stroll will join Hamilton on the front row of the grid, after Verstappen and Ricciardo’s penalties. While Ocon will move up to third, forming the second row with Bottas. Ferrari struggled in the wet conditions. This limited Kimi Räikkönen and title leader Sebastian Vettel to seventh and eighth, two-and-a-half seconds slower than Hamilton.

Felipe Massa wound up ninth in the other Williams, over a second slower than Stroll. Stoffel Vandoorne rounding out the top 10 positions for McLaren. Sergio Pérez missed out on a Q3 spot to team-mate Ocon by just 0.002s, taking 11th. Fernando Alonso and Renault’s Nico Hülkenberg followed, who will also take penalties.

Renault-powered Toro Rosso pair Daniil Kvyat and Carlos Sainz Jr. (another with a penalty), had to settle for 14th and 15th, the slowest of the runners in Q2. Kevin Magnussen led Haas’ charge after Grosjean crash. But he could not prevent a double Q1 exit for the team. He also dropped out of Q1, in 16th.

Ferrari in art – The Sporting Legacy