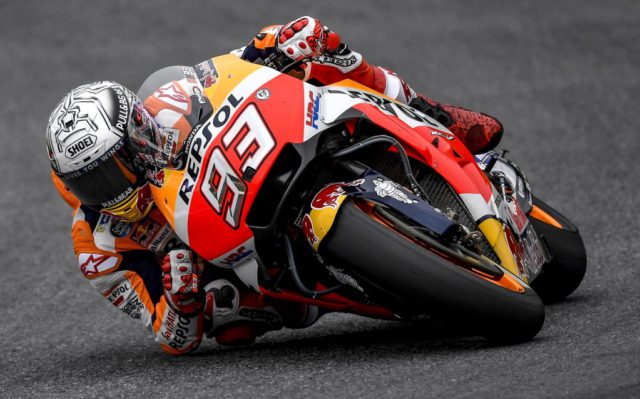 Marc Marquez captured his third successive pole position, and fifth of the season, as he controlled proceedings during qualifying for the Austrian Grand Prix.

Marquez set three rapid laps across the course of the 15-minute session, the fastest coming on his second effort, as he wound up with a 1:23.235.

Marquez’s pole position was his 70th across all categories, the first man to achieve the feat.

Ducati posed the primary threat to Márquez’s supremacy at the Red Bull Ring, though neither Andrea Dovizioso nor Jorge Lorenzo seriously challenged for overall honours.

Dovizioso finished 0.144s behind Márquez with a late effort, with Lorenzo completing the front row of the grid, 0.386s down on his compatriot.

Maverick Viñales’ led Yamaha’s charge in fourth, over half a second slower than Márquez, with Valentino Rossi in seventh position.

They were split by Pramac’s Danilo Petrucci and Tech 3’s Johann Zarco. While Dani Pedrosa was a low-key eighth for Repsol Honda, having had to negotiate his way through Q1.

Cal Crutchlow claimed ninth with a late effort, after his initial lap was deleted due to exceeding track limits exiting Turn 1.

Andrea Iannone suffered a mechanical failure in the fourth practice session. And was left to round out the top 10 for Suzuki. Ahead of Karel Abraham (Aspar) and Loris Baz (Avintia).

Jonas Folger will start from 13th position. He is in front of Avintia’s Héctor Barberá and outgoing Pramac rider Scott Redding.

Aprilia struggled for pace, with Aleix Espargaró running off-track en route to 20th spot. While Sam Lowes was a low-key 23rd. A day after it was confirmed that he will not be with the team in 2018.

THE FULL RESULTS CAN BE SEEN HERE

Raikkonen stays at Ferrari for 2018

Loeb: The Corsica roads are apparently faster than when I last competed here