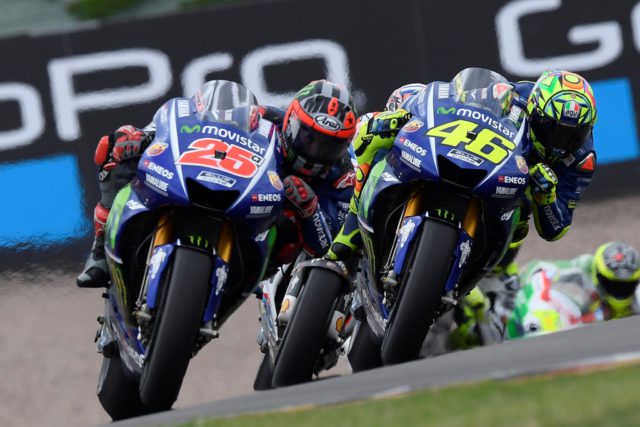 The Movistar Yamaha MotoGP Team starts the tenth MotoGP round with more determination than ever after a four-week abstinence from MotoGP racing. As the Monster Energy Grand Prix České Republiky at the Automotodrom Brno is rapidly approaching, the team can hardly wait to get the show back on the road. Maverick Viñales arrives in the Czech Republic in second place in the championship standings, five points from first, and with a great hunger to reclaim the number one spot.

Feeling refreshed after four weeks of training and spending time with family and friends, the young gun is ready to commence the title challenge in the second half of the championship, starting this weekend. He stood on the Czech podium once before in 2013, having secured second place in the Moto3 race. His best finish on a MotoGP bike in Brno is ninth place.

Teammate Valentino Rossi is also looking forward to stepping aboard his YZR-M1 again this weekend at the hilly circuit of Brno. Currently, in fourth place, just ten points behind the championship leader, the Doctor has all to play for at a track where he holds a stunning record.

The first motorcycle racing event in Brno took place in 1930, while the first Grand Prix was in 1965

Racers would ride 500cc bikes through the villages and western parts of the city on a 13.94km road track until the new circuit appeared in the 1980s. In 1987 the 5.4km Automotodrom track (six left corners, eight right corners) hosted its first FIM Czech Grand Prix, which became popular with both fans and riders thanks to its great atmosphere and location. The natural bowl offers spectators a perfect view of the action as the second half of the season kicks off.

It’s great to return from the holidays with recharged batteries and, having been able to rest, we can’t wait to get back out on track. Both the riders kept busy preparing themselves for the championship challenge during the summer break, so we arrive in the Czech Republic in good shape. This will be crucial in this closely contested season, especially with back-to-back races in the next two weeks. There are four riders within ten points at the top of the championship standings, so over the next nine races, we have to keep focused and put in a 100% like we always do, starting this weekend. Brno is quite an iconic circuit, that‘s loved by both the fans and the riders. The atmosphere there is really nice, so we are eager to get back into the rhythm with renewed energy.

I’ve enjoyed the summer break a lot. I spent it with friends and family, but now I can’t wait to be back aboard my Yamaha YZR-M1 again. We have to be focused on the second half of the season as it is going to be crucial if we want to fight for the championship title. There is no room for mistakes. I’ve been training during these weeks to be ready for Brno and Austria, two tracks that I really like and where I think that I can be strong.

I’ve rested during these holidays. I’ve passed a lot of time with my friends, but I returned to training and preparing myself as soon as possible and I feel good. I trained at the gym and on the bike, but now I want to go back to my M1 and work together with my team. The championship is still wide open and we will have to work hard to be always on the podium. Brno’s is a track I really like, I have a lot of good memories of this circuit and I hope I can make it another nice race this weekend. It will be important to be quick from the first session!

Vandoorne: It’ll be great to have the backing of my home crowd