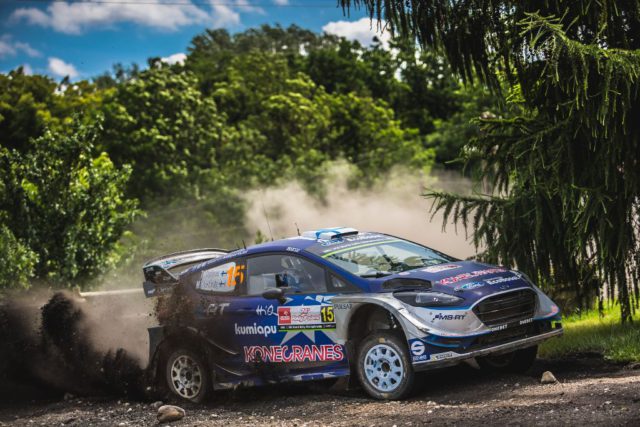 Teemu Suninen made his WRC debut in Poland and he only needed less than a day to win a stage. The Finnish driver was fastest in the second pass of Wieliczki (SS7). His team M-Sport defined Teemu’s whole performance as sensational. He has long been established as one of rallying’s most promising up-and-coming young talents, but Suninen is still firmly on the ground. In Poland, his aim was to work hard and make no mistakes, which he fulfilled and topped a wonderful driving with a sixth place.

The 23-year-old driver continued learned all the time, meanwhile setting a string of highly competitive times. At one point he even reached as high as fifth place overall.

A spin on the final speed test dropped the young Finn to sixth. But that was still a very impressive result on what was his first outing at the sport’s highest level.

Teemu Suninen made his WRC debut in Poland and he only needed less than a day to win a stage. The Finnish driver was fastest in the second pass of Wieliczki (SS7)

Suninen and co-driver Mikko Markkula now look forward to their next outing with the Ecoboost-powered Ford Fiesta WRC on home soil at Rally Finland.

“It’s disappointing to lose a place on the last stage with a small mistake. But okay, that’s the way it goes sometimes. And I think that it was still a good weekend for us”, Teemu Suninen said.

“We’ve learnt a lot and it was nice to get a fastest stage time on Friday. I think we’ve shown good speed through certain sections, but there remains work to do to keep that speed up for the whole weekend.”

“I want to improve and now I’m looking forward to my home rally in Finland where we can hopefully take another step forward.”

Power Stage and Rally Poland done. We can still be happy with our sixth place. Could not really ask for much more in a WRC debut. pic.twitter.com/CU73U0DO0u