The Jury of the Concorso d’Eleganza Villa d’Este voted the Renault Trezor “Most beautiful concept car”.

The prestigious Concorso d’Eleganza Villa d’Este exists since 1929 and takes place on the shores of Lake Como in Italy. The annual event attracts car enthusiasts and collectors from across the world, who celebrate automobiles as precious and timeless works of art.

Trezor is a working concept car with high-quality and original styling. These are just a couple of the requirements for the car to enter in the prototypes and concept cars category.

The lines of the Renault Trezor are warm, sensuous, while its assertive front end incorporates signature C-shaped lights. Renault’s upcoming models will draw their inspiration from Trezor’s DNA as their forms become even more fluid and mature.

The Trezor’s interior design, meanwhile, places the emphasis on driving enjoyment. And it features a large enveloping touchscreen display that reinforces the cockpit feel. This customisable, connected interface juxtaposes warming, prestige materials like wood and leather. The interiors of upcoming Renault models will take their inspiration from these increasingly refined styling trends and connected technologies. 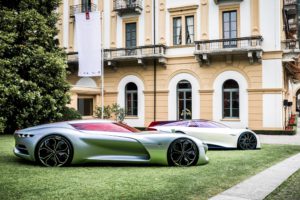 Renault’s team in Formula E – Renault e.dams – is the most successful team in the short history of the championship

It already won 2 teams’ titles, while the driver’s is one – for now. Manager is 4-time F1 world champion Alain Prost, who works in cooperation with DAMS founder Jean-Paul Driot. The team has strong technical support from Renault Sport Racing. After six rounds of the 2016/2017 season it leads in the constructors’ standings, while Sebastien Buemi is first in the drivers classification.

Renault embraced the innovative series, as well as seizing the opportunity to demonstrate its expertise in electrical vehicles on an international platform. It developed one of the most powerful and technically advanced powertrains in the field, while using its motorsport engine hub at Viry-Châtillon. That is also the centre for work on the hybrid power units for Formula 1, where Renault also competes at the highest level.

In F1 the French team shares sixth position with Haas, as both teams have 14 points each. Last weekend Renault celebrated 40 years since it first entered Formula 1.

“Over the past forty years we have used Formula 1 as a laboratory for testing new technical innovations, such as the introduction of the turbo-charger to the sport with our very first Formula 1 car, the RS01. Our technical innovations on track provide inspiration and advancement for our road products, and we showcase the latest manifestation of this with the first glimpse of the exciting New Mégane R.S. with Nico Hülkenberg”, Renault Sport managing director Cyril Abiteboul said.

Malcolm Wilson: We never dreamt of achieving anything quite like this in Germany