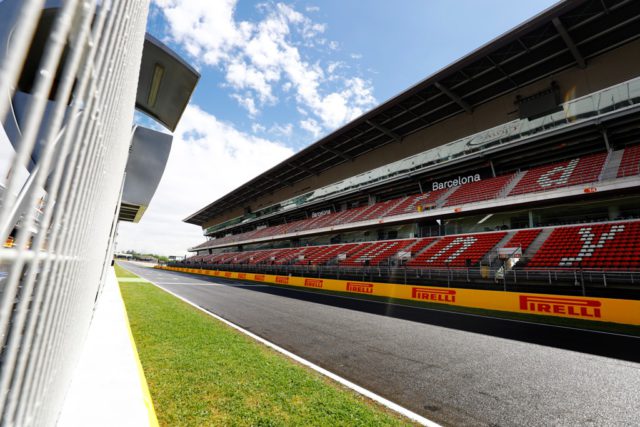 Mercedes drivers Lewis Hamilton and Valtteri Bottas outpaced their Ferrari rivals in the second free practice for the 2017 Formula One Spanish Grand prix. Lewis Hamilton was fastest, followed by his teammate Valtteri Bottas. Kimi Raikkonen and Sebastian Vettel were again third and fourth.

The air temperature had climbed to 24 degrees, the track was already 43, while during the pre-season tests of Catalunya reached 33 degrees. Fernando Alonso had returned to the paddock after an hour and 15 minutes of alternate training due to his broken power unit at the very beginning of the first session.

In McLaren, Alonso’s car (with a new power unit) was still not ready. Meanwhile, there were bets in social networks how long the Spaniard would drive before something went wrong.

Lewis Hamilton went off on the 13th turn, while Bottas made a clean run and became first in the standings with 1:23.062. The Finnish Mercedes driver also received a radio message that the wind on track has increased. The Englishman went out third with his next quick lap, just over half a second behind his teammate.

Nearly half an hour after the start of the training, Alonso came out on the track. At the same time, the top teams started testing soft tyres (marked in yellow) – the softest compound Pirelli brought in Spain (the other two are medium (white) and hard (orange)). With them Vettel was fastest at this time of the session – 1:21.220. His teammate Raikkonen jumped him by 1:21.112, after which Bottas topped the table, going under 1:21 min – 1:20.892. Hamilton was 0.090 seconds faster than his teammate (1: 20.802). 0.418 seconds covered the first four drivers (from Hamilton to Vettel), while Williams’ technical chief Paddy Lowe explained that the difference between soft and medium could be up to 3 seconds.

Half an hour before the chequered flag, the session stopped so the marshals could gather the remains of a Toro Rosso component from Sainz’s car in turn 9. Clearance took less than 5 minutes, after which training resumed. Alonso put on soft tyres and improved his time, but remained last.

By the end of the session a lot of drivers went off track, including Bottas and Vettel. But there were no serious incidents. Hamilton remained fastest, followed by Valtteri, Raikkonen, Vettel, Verstappen, Ricciardo, Hulkenberg, Palmer, Massa, Sainz.

Fab Friday for @MercedesAMGF1 as they finish P1 and P2 in both sessions ?#SpanishGP ?? #FP2 pic.twitter.com/U8fOnsQ9ky

Tänak hopes for less extreme weather on Day 2 in Germany

Ferrari in front of Mercedes in FP2 at Monza