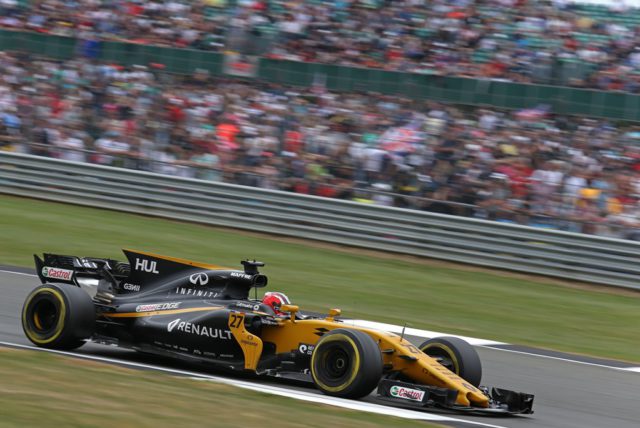 Renault had a weekend of mixed feelings at the Silverstone circuit. Exactly 40 years after its Formula 1 debut (the first race with Renault as a participant was at 16 July 1977) the team took points with Nico Hulkenberg. His teammate Jolyon Palmer though could not even start his home Grand prix. The British driver stopped during the formation lap with a hydraulic leak.

“We are very happy with the race result. P6 is a big success for the team”, Hulkenberg commented

“We were able to get a good lap in qualifying and then to carry it through to the race. Race pace was strong, and we were able to keep ahead of both Force Indias, which is really positive. We lost some power at the end, especially down the straights, which made it easier for Daniel [Ricciardo] to pass me, but then we gained back a position from Seb [Vettel] when he had his problem. Overall this is a very positive result. The new upgrades worked really well, we were able to push the car.”

Palmer admitted that going out at the start was really frustrating

“Pretty gutting as I think we were in a good position”, he continued.

“Eleventh with new tyres, a car that was working really well with lots of different options on strategy: all was looking good to get some points. I have had so much support all weekend that it would have been sweet to get them here. All the same, we can see that the car has taken a step forward, but we just need to look at reliability now.”

He had assured the British driver on the morning of race day that his place in the team was not in any danger.

“We have to say sorry to Jo as he finally had the starting position he needed and we all wanted him to get those first points today. He almost certainly would have made it if we hadn’t had the problem”, Abiteboul said.

“On the other hand, we had a great race with Nico. He drove very well, with no mistakes, good strategy execution and we were a good thirty seconds ahead of both Force Indias. There is always a bit of frustration to be so exposed to reliability weaknesses as we could have done even better [at Silverstone], but what is important is that the upgrades have worked well and we are delighted to see this bear out in the results. With more to come in the coming races, I hope we can keep the momentum going to end the first part of the season on a high. Scoring points was a good way to end our 40th anniversary weekend.”

Good day everyone, it’s #WallpaperWednesday! Our #BritishGP selection is waiting for you there ? https://t.co/cLWBhlRXKD.
Go download, go! pic.twitter.com/lECHiAtu4s

Sainz triumphs at the 2018 Dakar Rally