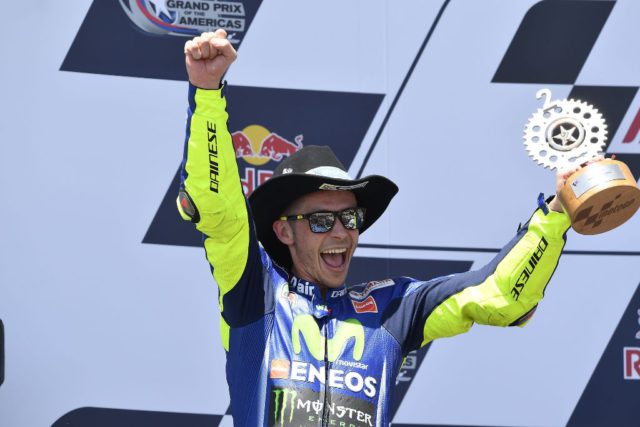 Valentino Rossi showed an impressive pace in the Grand Prix of The Americas to claim his third consecutive podium finish of the season. Teammate Maverick Viñales was looking confident, but his race ended prematurely 20 laps before the end.

Rossi was strong out of the gates and settled into third position exiting the first corner. He chased Marc Marquez and Dani Pedrosa in the opening laps, careful not to let them clear off into the distance.

With 15 laps to go the Italian went wide in the first corner and got into a scrap with Johann Zarco. After a touch between the two Yamaha riders in turn 4, the Doctor was pushed wide, but he quickly rejoined the track and held on to third position.

As the front runners quarrelled over the next few laps, Rossi took the opportunity with both hands to close the gap. He reached Pedrosa with five laps to go and bided his time. Two laps later, his carefully planned overtake came in the last corner. The nine-time World Champion then put his head down. He was on the limit for the last two laps to take the flag +3.069s behind the leader. Valentino secured second place despite being penalised with 0.3s at the end of the race, due to the incident with Zarco.

“It was a great surprise for me and for the team because we were struggling very much with the new bike, especially during the winter”, Valentino Rossi admitted

“I think we need more time to understand the setting and the way to ride it. But at the end this bike is very good, especially in the race and with the used tyres”, he continued. “I’m so happy, because I wasn’t so far from the front. And it’s also the best result of my career at this track, so it’s good. When I saw ’Viñales out, I started to think “I’m on top of the championship standings”. I felt good and I also saw Dani having some problems, especially on the right, so I said “maybe those four points are important” and in fact it was like that.”

“For me the penalty wasn’t right. The problem is we either do it like this, or we crash together at a very dangerous point. But for me, though accepting Race Direction’s decision, the mistake was made by Zarco.”

“I did exactly the same as in Warm Up and all weekend, but I crashed. I think we had some issues with the front tyre. But anyway, we know that we are strong and that we have the speed. We can be strong again. So I’m going to try to forget this crash and come to Jerez even faster, stronger and more consistent than I was at COTA”, Viñales added.

“Overall it’s been a mixed race for us”, Team director Massimo Meregalli concluded

“Valentino did a fantastic job to take a very important second place. His start was good and played a vital role. He positioned his YZR-M1 exactly right and this allowed him to chase the leading duo. It was inevitable for him to go onto the run-off area after the incident with Zarco. But Vale’s experience shone through again. He was quick to get his head down and at the end we get to celebrate a strong second place, even after the questionable 0.3s penalty.”

“It was very unfortunate that Maverick’s race ended early. Judging by the pace he displayed all weekend, he would certainly have been able to challenge for the victory. We have checked the data and there’s nothing strange or different from what he has done since Friday. The front closed without any warning and he could not do anything to save it. It’s a great pity because he was really confident on the bike. So we take that away from this race weekend as a positive. We’re certain he will come back strong in Spain in two weeks’ time.”

EKS Audi Sport heads to the mountain heights of Portugal

Hamilton close to the title after a win at Suzuka