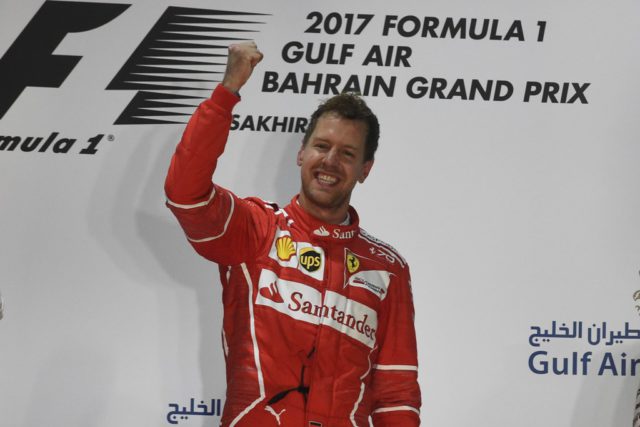 Sebastian Vettel said his car was “like a dream to drive” at Sakhir circuit where he took his second win in the 2017 Formula 1 championship.

The four-time world champion thanked again his team, while also saying the result in Bahrain was great for everybody in Maranello.

“At the start, it was important for me to get second place, and I managed [to do that]”, Sebastian Vettel explained. “Also, we got everything right with the strategy. We decided to pit early and this tactics proved to be working. Towards the end, I tried to manage the gap I had over Lewis [Hamilton]. I expected him to charge through, of course I was concerned, with all the traffic ahead of me. But it the end it was all OK. The car was like a dream to drive. I felt right from the beginning that we had the speed to win. I had a good feeling on Saturday already, and it was just confirmed on race day. The lap back to pits was so sweet, with all the fireworks around, and I really savored it.”

Sebastian Vettel: “We’ll be back at work fast. I haven’t changed my mind: to become world champion, you must first beat the Mercedes. We’ll take it race after race”

“This victory was an important one, achieved thanks to the great efforts of all the guys at the track and back in Maranello. For the whole weekend, the team demonstrated courage, determination and a little bit of madness. This is all part of our DNA, characteristics which 70 years ago saw the birth of Ferrari. Courage and determination were needed to tackle a weekend like this, in which we expected to encounter a few difficulties in qualifying, which is why, based on good long run data on Friday, we prepared as well as possible for the race. In order to do this you also need to use some madness… Sebastian drove a really great race, demonstrating once again all his class.”

“Kimi [Raikkonen] was caught up in traffic at the start and then he certainly wasn’t helped by the arrival of the Safety Car. The SF70H proved itself to be strong also in these conditions, at a track which requires above all power and good traction. The tyres worked very well, which allowed us to fully exploit our very good strategy. And now it’s time to concentrate on the next round of the World Championship, the Russian Grand Prix in Sochi.”

Ricciardo: I just knew putting a lap together would be crucial