In 1984, Michael Jackson took the music world by storm with Thriller. On the big screen, Ghostbusters and Indiana Jones and the Temple of Doom smashed all box-office records. It was also the year when Facebook founder Mark Zuckerberg was born, and the year the first SEAT Ibiza was launched on the market. Since then, this model has been driving on streets and roads all over the world continuously for 33 years. It is now about to enter its fifth generation.

In three decades, the SEAT Ibiza has accumulated four generations. It is the top-selling Spanish passenger car – to date, more than 5.4 million units have been sold. If arranged in a straight line, they would exceed the distance between Barcelona and New Zealand.

The design, development and production of every Ibiza generation happened in Barcelona. Italy’s Giorgetto Giugiaro was the Design Director responsible for the first generation. The engine was developed with the collaboration of Porsche, thereby creating the System Porsche designation, and car module manufacturer Karmann helped build the bodywork.

Fuel consumption lowered to less than half

Every day 700 new SEAT Ibizas roll out of the Martorell factory. 80% of them are for export to over 75 countries. In fact, the Ibiza was behind the internationalisation of the brand as it was the first regularly exported model from Martorell. 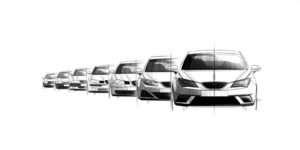 Headline figures of the Ibiza

Its production involves more than 700 robots. Each vehicle contains 3,000 parts, and it travels nearly 12 km to complete its production process.

The Ibiza was the first SEAT car to integrate women on the production line. Today, women account for 1 out of every 5 workers on this line (21%), the highest rate in Spanish industry. In addition, the global market has seen more and more women buyers in the last ten years, accounting for 51% of the share compared to 42% in 2004.

The Ibiza was the official car of the Barcelona ’92 Olympic Games. It also achieved notable successes in competition racing, such as the three FIA World Rally Championship titles in the 2 litre category in 1996, 97 and 98.

SEAT is the only company that designs, develops, manufactures and markets cars in Spain. A member of the Volkswagen Group, the multinational has its headquarters in Martorell (Barcelona). It exports more than 80% of its vehicles, and is present in over 75 countries. In 2016, SEAT’s achieved worldwide sales of 410,200 units, the highest result since 2007.

SEAT Group employs more than 14,000 professionals at its three production centres – Barcelona, El Prat de Llobregat and Martorell, where it manufactures Ibiza and Leon. Additionally, the company produces the Ateca and the Toledo in the Czech Republic, the Alhambra in Portugal and the Mii in Slovakia.

The multinational company has a Technical Centre, which operates as a knowledge hub. It brings together 1,000 engineers who are focused on developing innovation for Spain’s largest industrial investor in R&D. SEAT already features the latest connectivity technology in its vehicle range and is currently engaged in the company’s global digitisation process to promote the mobility of the future.

50 years ago #SEAT built a great car. Then it kept building. See how the Ibiza has improved on the classic SEAT 850. pic.twitter.com/qJfN4wZUez

Sebastien Ogier: “I am not in Spain to make amends for that mistake”