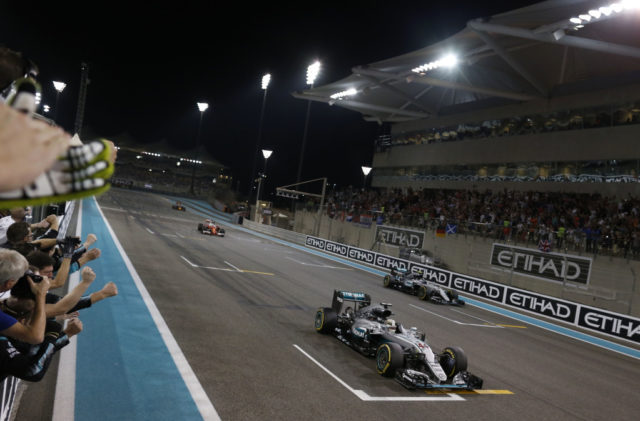 Lewis Hamilton has defended his tactics during the Abu Dhabi Grand Prix. He attempted to deny Mercedes team-mate Nico Rosberg the 2016 World Championship, by backing him in Vettel and Verstappen. Hamilton needed to win the season-ending race at the Yas Marina Circuit and hope that Rosberg was not able to finish on the podium in order to defend his title.

Lewis started from pole position and led away. Then he maintained a gap over the second stint of the race. Following the second round of stops, Hamilton held a one-second advantage over Rosberg, and received several messages from Mercedes to increase his pace. As Sebastian Vettel and Verstappen closed in.

In the end, the tactics did not work, and Hamilton lost the title by five points despite winning his 10th race of the year. The three-time champion felt he did nothing wrong.

When asked if he was annoyed by the instructions, he said: “Not really. I don’t know why they didn’t just let us race. There was never a moment where I feel I was going to lose the race. It is a shame that it is quite clear their thought process… and I don’t have much to say to be honest.

“I was hoping Vettel would close up but his tyres were going off towards the end and Nico drove well to not make mistakes. It was pretty chilled at the end. It may have been intense for you but not intense for me.

For me, I am in a position where I had a lot of points lost during the season. So for me I am out there fighting and generally never try to do anything to harm the team or the brand. But we won the constructors’ championship. So it was down to me and Nico today. However they felt they still needed to make comments. We will discuss it afterwards as we all do.”

Esapekka Lappi with a test and development car in Italy