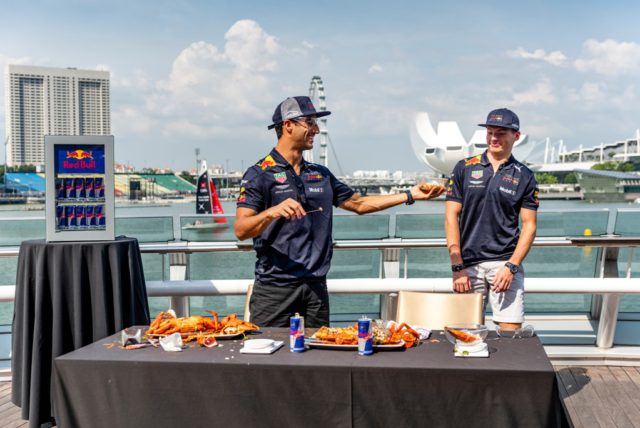 Max Verstappen had to dig deep in Singapore to overcome his dislike of seafood in the latest Dine and Whine challenge. Meanwhile, Daniel Ricciardo was his usual smiley self during the challenge.

After resisting the urge to fill a bucket when faced with the durian fruit, Verstappen faced another big test as his dislike of seafood is well known in the team.

Both drivers were fitted with a pair of gloves and goggles, then charged with extracting as much meat as possible from the mud crab to win this latest test.

How to do the Lion City right ??? Your #SingaporeGP check list ✅ #F1NightRace pic.twitter.com/azYxSgAmgT

As expected Verstappen turned a deep shade of green, while Ricciardo wielded his hammer with gleeful abandon to smash through the claws and legs in front of him.

Crackin’ up ahead of the #SingaporeGP ?? Getting our claws into Singapore ?? https://t.co/fnq416IUwC #F1 pic.twitter.com/oPKB16lb39

Citroen prepared for the German WRC round with one of the most intense tests...

Dixon to be featured in documentary