Romain Grosjean finished in the top at the Italian Grand prix but was disqualified because of a technical infringement. Now he previews the Singapore Grand prix.

Haas F1 Team has had its drivers finish inside the top-10 in seven straight races (the team is counting the Italian Grand prix as the team is appealing the Monza disqualification). That’s a span covering a variety of tracks and conditions. What does that kind of consistency say about your drivers and your race team?

“The team is performing very well. It’s improving a lot year after year and race after race. We’ve got a great car everywhere. We can look forward positively to the end of the season.”

That consistency has allowed Haas F1 Team to truly fight for best-of-the-rest honors in Formula One. It’s a battle with Renault, and there’s a healthy margin back to the other teams. Considering this is only Haas F1 Team’s third year, is this kind of performance surpassing even your own expectations?

“Yes. I was thinking we could try to go for fifth in the constructors’ championship, but fighting for fourth and having a good chance to go for it is better than I was expecting. I’m very happy with that.”

Have recent events emboldened the team to where no stone will be left unturned as Haas F1 Team vies for fourth in the constructors’ standings?

“That’s for sure. We’re fighting against the best in the world, so we need to get things right.”

After a difficult start to the year, you’ve come on strong of late with seven straight finishes in the top 10. Is there anything in particular that has allowed for this surge in performance?

“I’ve worked on myself to understand why things were not going right before. The car is giving me a better feeling, as well. I’m enjoying my time, and I’m hoping there will be more and it keeps going.”

“It always exists. You try to prepare as much as you can, but you don’t always know what to expect. We do all our preparation, we focus on our own work, we do our best, and we aim for points come Sunday night.”

What did you find that made your car perform better on a slower, tighter track?

“Generally, the updates we’ve brought to the car have been working very well.”

With the experience of Hungary and the collective experiences from this summer, what are your expectations for Singapore?

“I will do my best and do my best for the team. Hopefully, it will be a really good race for us with some strong points.”

What are the challenges of the Marina Bay Street Circuit and how do you overcome them?

“One of the big challenges is the heat and humidity, which is very, very difficult in Singapore. Another challenge is the race, as it’s usually about two hours long, and it’s a street circuit, so it’s very difficult.”

Singapore is one of only three night races on the Formula One schedule, but it’s also the original night race. Do you like competing at night?

“I do like the Singapore Grand Prix. I do like competing in the night. It’s pretty good fun. It makes some great footage, and clearly, Singapore is one of the most beautiful races you can have at night. It’s pretty awesome. It provides something a bit different on the calendar. I’m very much looking forward to it and seeing what we can do there.” 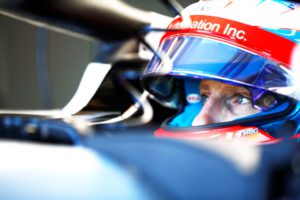 Because the Singapore Grand Prix is at night, is there a heightened sense of speed?

“It’s actually easier at night because the lights never change. The luminosity is always the same. You stick with the same visor, and driving at those speeds in those conditions is absolutely fine.”

Singapore’s layout forces drivers to run close to the track’s walls for the majority of a lap. While the margin for error is always low in Formula One, is it even lower at Marina Bay Street Circuit?

“Yes. You pretty much have to hold your breath and hope for the best, especially when you’re pushing in qualifying, as you run so close to the walls.”

How do you handle the bumpy nature of Singapore’s layout, and are there specific sections of the track you have to remember to avoid?

“Especially between turns three and four, and on the long straight, it’s very bumpy. You really want to find the right line there. When you make an overtaking move there, you’ve really got to be sure you’ve got the car with you as it’s very tricky.”

Between the bumps and the heat, how physically taxing is the Singapore Grand Prix?

“It can be very physical. All week we never see the sunlight, so that takes a bit of energy away. Then it’s humid, it’s hot and it’s always a long race. We usually reach the two-hour limit. It’s very, very demanding. I remember back in 2013, I lost four kilos (nine pounds) of water during the race, which is quite a lot.”

In addition to its physicality, is the Singapore Grand Prix mentally exhausting because of the close proximity of the walls, its multitude of turns and high safety-car frequency?

“Mentally, it’s very difficult, as much as it is physical. It’s clearly one of the races where you need to be at your fittest in the season.”

Despite the mental and physical nature of the Singapore Grand Prix, drivers love it. Why?

Because of Singapore’s high heat and humidity, do you do anything special in advance of the race and during the race weekend to stay hydrated?

“I think as long as you’re fit as you can be, that’s the most important thing. I cope pretty well with the heat, normally. I just get myself ready, jump in and go for it.”

Where are the overtaking opportunities at Marina Bay Street Circuit?

“On the long straight after turn four, and then again when you come back after the bridge on the second longest straight into the braking zone.”

“Main straight going into turn one, heavy braking, easy to front lock. You want to carry through some speed there. You go into a tight hairpin with a tricky throttle application. Then turn four is a mid-speed corner going into the longest straight on the track, big braking at the end of that. Then a right-hand side, 20-degree turn followed by a left-hand side, 90-degree turn. Then you go to the left carrying some speed with a right chicane.”

“It’s pretty tricky going under the bridge. There’s a bit of a bump, tricky braking at the end before that left hairpin. On the back straight it’s important to get good traction. Big braking to go into the next right-hand side, 90-degree turn. The next braking zone is a bit tricky, then the chicane at (turns) 18 and 19, having passed the stadium, where there’s no room for error. Last sequence – a lot of inside curb through turn 21. We see a lot of cars touching the wall on exit there. The final corner is the second quickest on the track. It’s pretty cool. You carry top speed from there to the start.”

Where in the ? are we heading to this week? #SingaporeGP | #F1NightRace pic.twitter.com/GWAWaVks88

Budar: Ogier and Ingrassia are helping us to make progress very quickly