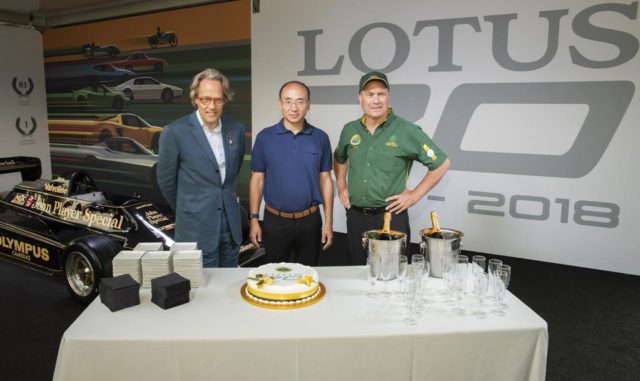 Lotus has marked the 70th anniversary of its inception with a birthday cake and Champagne reception with the Duke of Richmond and Gordon at the Goodwood Festival of Speed.

The celebration heralds a new chapter for the company as it marks its impact on the world of sports and competition cars. From humble beginnings in 1948, it has grown into a global brand. Lotus produces iconic road cars as it produced World Championship winning race cars. The current range of cars is the brands strongest ever line up. It also perfectly encapsulates the core principles of founder Colin Chapman’s obsession with innovation through weight reduction and aerodynamics.

The unconventional approach and entrepreneurial spirit ensure that the brand remains as agile, fast and responsive as its cars. Lotus continues its founder’s principle by building some of the fastest and best handling sports cars available. With the son of the founder, Clive Chapman, representing the heritage of Lotus, and its racing success, it marks the start of a new chapter for the manufacturer as well as maintaining its heritage. 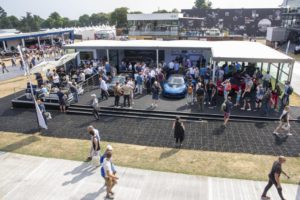 Lotus at the Goodwood Festival of Speed 2018

The British brand is celebrating its 70th anniversary at the Goodwood Festival of Speed 2018 as an Automotive Partner of the event. This year’s Festival allows visitors to see some outstanding cars from the marques’ past running the Hill. These include Jim Clark’s Lotus 25 and Graham Hill’s Lotus 49 – both of these are championship-winning cars. There’s also Ayrton Senna’s first F1 race-winning car. Visitors can see as well the Lotus 97T and the revolutionary Lotus Type 56 gas turbine IndyCar.

The current line-up of the brand’s sports cars are proudly displayed on the company’s stand in the main exhibitors’ space. This includes the Celebration Exige Type 79, which is appearing with a Type 79 racing car. The latter was part of Mario Andretti’s Championship winning 1978 year as well as another part of the brand’s illustrious history.

The second of two Celebration cars for Goodwood is the Exige Type 49. It can be found in the First Glance paddock and will be driving the Hillclimb route until Sunday.

In a fitting tribute to Lotus’ most successful racing driver, the British manufacturer is a proud supporter of the Jim Clark Trust, the official charity of this year’s Goodwood Festival of Speed.

Palmer: Monza is all about finding a good top speed, with the optimum downforce...