The future of mobility is another step closer. Series production of the first purely electric Porsche is set to begin next year. In preparation, the vehicle has now received its official name. Porsche used the designation “Mission E” concept study. The complete electric offering now receives the name Taycan. The name can be roughly translated as “lively young horse”. The reference is the imagery at the heart of the Porsche crest, which has featured a leaping steed since 1952.

“Our new electric sports car is strong and dependable. It’s a vehicle that can consistently cover long distances and that epitomises freedom”, explains Oliver Blume, Chairman of the Executive Board of Porsche AG. The oriental name also signifies the launch of the first electric sports car with the soul of a Porsche. Porsche announced the name for its first purely electric series as part of the “70 years of sports cars” ceremony.

Two permanently excited synchronous motors (PSM) with a system output of over 600 hp (440 kW) accelerate the electric sports car to 100 km/h in well under 3.5 seconds and to 200 km/h in under twelve seconds. This performance is in addition to a continuous power level that has no precedent among electric vehicles. Multiple jump starts are possible in succession without loss of performance. And the vehicle’s maximum range is over 500 km in accordance with the NEDC.

At Porsche, the vehicle names generally have a concrete connection with the corresponding model and its characteristics. The name Boxster describes the combination of the boxer engine and roadster design. Cayenne denotes fieriness, the Cayman is incisive and agile. The Panamera offers more than a standard Gran Turismo, which is what allowed it to win the Carrera Panamericana long-distance race. Meanwhile, the name Macan is a derivative from the Indonesian word for tiger, with connotations of suppleness, power, fascination and dynamics. 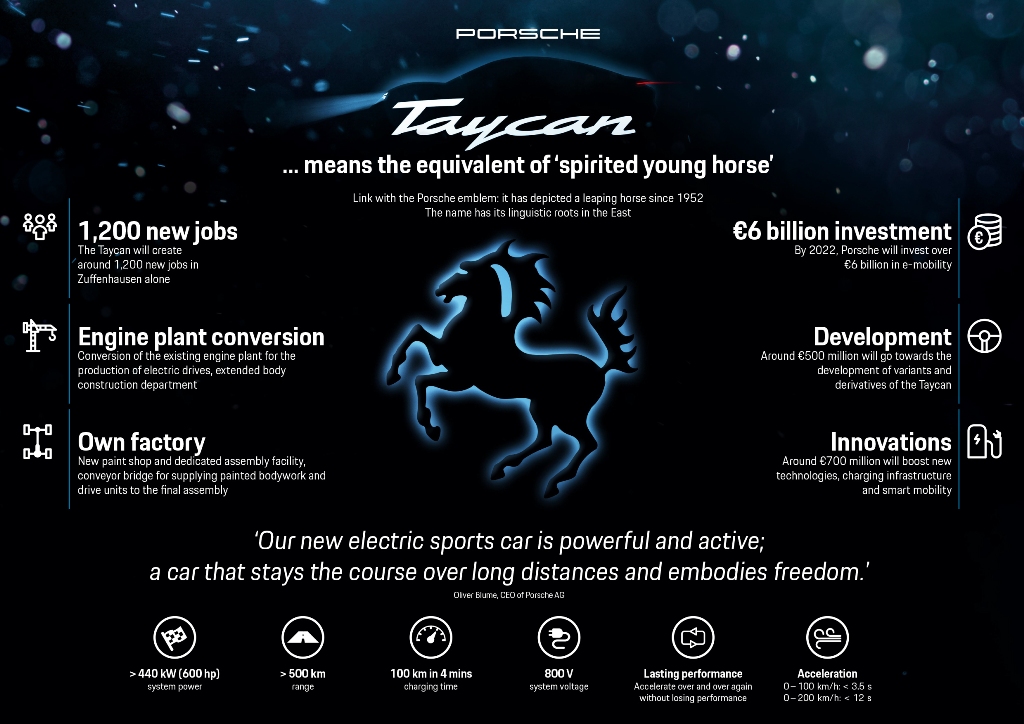 Extensive modifications and expansion at the Zuffenhausen headquarters

At the Porsche headquarters in Zuffenhausen, there will be a new paint shop and a special assembly area for the Taycan. There will also be a conveyor bridge for transporting the painted bodies and drive units to the final assembly area. All are currently under construction. The existing engine plant is also expanding to manufacture electric drives. And the body shop will go through a development as well. Meanwhile, there are plans for an investment for the Weissach Development Centre. Production of the Taycan is creating around 1,200 new jobs in Zuffenhausen alone.

The sports car manufacturer is celebrating its anniversary with numerous activities throughout 2018. For the weekend of June 16-17, Porsche will host employees, local residents and prospective customers at a celebration in and around the plant in Stuttgart. The event will include all kinds of activities. There will be plant tours, music, food trucks as well as live coverage of the 24 Hours of Le Mans. And also a broadcast of the World Cup game between Germany and Mexico as well. Entry is free of charge.

Jaguar I-Pace – the future of electric motoring hits the streets