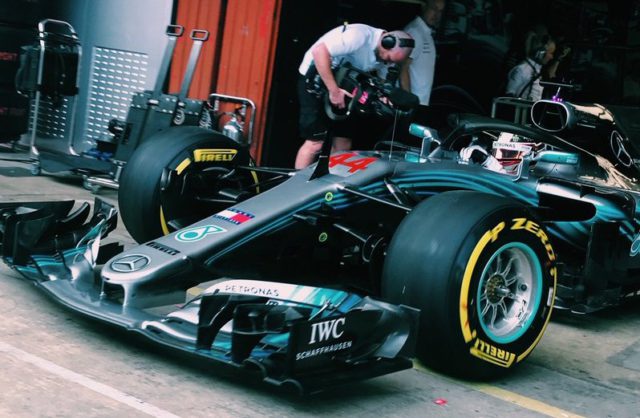 Lewis Hamilton topped final practice for the Spanish Grand Prix after the session was red flagged following a hefty crash for Brendon Hartley.

Hamilton’s 1:17.281 was just 0.013s faster than Mercedes team mate Valtteri Bottas, with the Ferraris of Sebastian Vettel and Kimi Raikkonen behind.

The session ended early after Brendon Hartley lost control of his Toro Rosso into the fast right hander of Turn Nine. He spaun backwards into the wall and causing severe damage to the car. Hartley was able to climb out of the car unaided.

Overcast skies over the Circuit de Catalunya meant track temperatures were slightly lower than on Friday.

But that didn’t seem to affect performance as Mercedes quickly picked up where they left off. Valtteri Bottas first and then team mate Lewis Hamilton lowering the quickest times of the weekend so far on the Soft compound tyres.

Mercedes then opted for the Super Soft tyres and went even faster. Hamilton setting a new track record with a 1’17.281 that was almost matched by his team mate.

Max Verstappen drew the attention of the stewards. The Red Bull driver took to the escape route at turn one but failed to stay to the left of a bollard as mandated by the FIA. He remains under investigation.

After beaching his Williams in the gravel at Turn Five yesterday, Lance Stroll had another excursion, this time into Turn Four. Thankfully for the Canadian, Stroll was able to recover back to the track.

Romain Grosjean had another off in the Haas after being caught out catching Sergey Sirotkin into Turn Two.

The championship leader is on top heading into qualifying

Neuville: It was a truly fantastic fight with Ogier