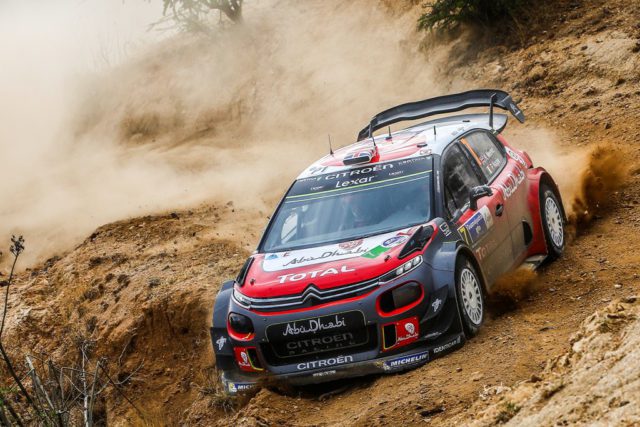 In theory, Kris Meeke arrives home for next weekend’s Dayinsure Wales Rally GB (26-29 October) on the crest of a wave after winning the previous round of this year’s pulsating FIA World Rally Championship earlier this month in Spain. But, in reality, this has been an erratic campaign for the 38-year-old Ulsterman from Dungannon who started the year as one of the title favourites.

Victories in both Spain and Mexico (albeit only after surviving a last corner excursion through a spectator car park!) can not mask what, overall, has been a frustrating season.

Despite taking a sabbatical in 2016 to develop a new be-winged C3 to meet the latest technical regulations which have spawned a faster, wilder breed of WRC cars, Citroen’s contender has proved surprisingly volatile: ultra-competitive on some events and thorny on others. When combined with Meeke’s renowned no-holds-barred approach, its spikey-side has resulted in numerous crashes and the Ulsterman being ‘benched’ by the team for Rally Poland.

The French equipe, though, has been working hard with the help of its former champion Sébastien Loeb to make its red rocketship more user-friendly and, while one eye is already on 2018, Meeke would dearly love to add a home victory in Wales to the five WRC wins he amassed to date. You can find out more in the interview below, conducted by the Dayinsure Wales Rally GB press office…

How does the win last time out in Spain boost your hopes for a follow-up win in Wales?

“It’s certainly boosted our season. We had a fairly difficult period in the middle of the year and the win has boosted morale within the team. Hopefully, we can now carry that confidence forward. The car worked very well on the Tarmac surface in Spain. But, as regards to raising expectations for GB, it’s difficult to say. We’ll have to wait and see how the car feels in the Welsh forests. The confidence boost, though, can only help us.” 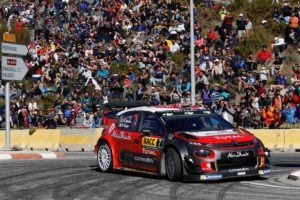 The C3 wasn’t at its strongest in Finland which is considered to be similar to GB in many ways; do you expect it to be any more competitive in Wales?

“We really don’t know. We know the car is fast – that’s for sure. But at times the car has felt a bit nervous on certain types of gravel. We will simply have to wait and see. It’s impossible to say and to judge what the car will be like; indeed, what the weather conditions will be like… We know our lowly road position of ninth [his championship position] on Friday is not ideal for having a competitive edge, as running near to the front on this event is an advantage. Predictions aside, the only thing I have to do is my very best – as I always do. The important thing is to get a good finish.”

On a positive note, you should be better placed for Saturday which is the event’s longest, toughest and most challenging day starting before dawn and concluding well after dark.

“For me, the changes to this year’s itinerary are really good. We need good long days like this on Rally GB, and rallying into the darkness is something pretty special. This is probably the only event in the year where we can have gravel stages at night, as there are no problems with dust. The atmosphere is great and Rally GB should always be about endurance as well as creating a spectacle. It’s going to be a long, tricky weekend as it always is, but everyone should enjoy it.” 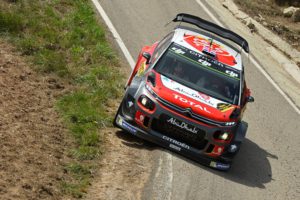 Indeed, everyone is looking forward to seeing these new, more powerful and exciting WRC cars competing here in Britain – what are they like to drive?

“With this year’s new regulations, the cars are visually a lot more dramatic. We have quite an increase in horsepower, too, and they are a very different animal to handle. They certainly are going to be exciting come Wales Rally GB on the high-speed sections and the spectators are going to enjoy them as they certainly are very spectacular to watch. They are more powerful, so hopefully, everyone will stand in safe place and enjoy the show.”

As a child you were inspired by the likes of Colin McRae; coming to Wales do you see yourself as someone who can inspire future generations of British rally drivers?

“To be honest when you’re in the goldfish bowl of the World Championship, you are solely focused on doing your job. As a paid professional there’s pressure to perform and to get results. Sometimes it’s difficult to imagine that people are looking up to me as I feel that I’m just doing what I’m paid to do to the best of my ability. For sure it would be great to inspire a new generation of rally enthusiasts and drivers. It’s what the sport needs and a local guy doing well keeps the appetite going in a country. Hopefully between me, Elfyn Evans and Craig Breen we will give the home support something to cheer in Wales.”

How will the title fight between the top three in championship – Sébastien Ogier, Ott Tänak and Thierry Neuville – affect your rally?

“Unfortunately we’re not in the fight so it won’t affect me whatsoever. I’m simply trying to get my season back on track as much as I can and to prepare for next year. We have to get the best result possible – what happens between Neuville, Tänak and Ogier is their own affair.” 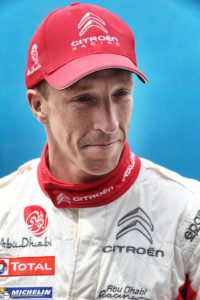 You talk about 2018, do you see Dayinsure Wales Rally GB as a test session for that, or a chance to win? After all, this is one of the events you have always said that you really want to win having finished third in 2014 and second in 2015.

“To win in Finland, Argentina, Portugal, Mexico and now on the asphalt in Spain are all special. But, for sure, winning Rally GB is a box I’d dearly love to tick. But you learn over the years not to go to events with huge expectations. Everything needs to come together over the weekend – most importantly the feeling in the car. And we don’t know yet whether that’s going to be there in Wales. Let’s see how we get on. Hopefully, we can set off on the right foot and then see how we go from there. But, yes, I’d dearly love to win the rally but, whether that’s this year or not, I’ve no idea.”

Obviously, you must be disappointed not to be in contention for titles. But you must get some pleasure from seeing those at your former team M-Sport on the cusp of both Manufacturers’ and Drivers’ crowns?

“Yes, you have to give credit where credit is due. Bringing Ogier into the squad at the start of the season has been a major factor; it’s giving them a sense of belief. The reliability and strength of the Fiesta on different surfaces has been there throughout the year, too. It looks like they are on track to win the Manufacturers’ title and, quite possibly, score a one-two in the Drivers’ title. You have to respect them for what they’ve done this year.”

Finally, what is our favourite special stage on Wales Rally GB?

“I have so many of those! I do particularly enjoy Hafren, but also Dyfi and Dyfnant. These are stages that I did on my very first rally in a little Peugeot 106 many, many years ago in the Bulldog Rally. Talking about these stages just makes me think of the Welsh air, the smell of the forests. I just can’t wait to get going.”

Looking forward to @Rallylegend this weekend, where I will drive a @CitroenRacing #Xsara #WRC in honour of my mate and mentor #ColinMcRae pic.twitter.com/XZ9WA96wjD

Tony Kanaan replaces Bourdais for the 24 Hours of Le Mans