The three Formula E champions launched the inaugural race in Rome with a street demonstration in the city. The newest addition to the grid – Luca Filippi – joined reigning champion Lucas di Grassi, as well as Sebastien Buemi and Nelson Piquet Jr and they made a stunning display at the launch of the Rome ePrix.

The drivers made a pit-stop at Campidoglio, continued past the iconic Colosseum and towards the Roma Convention Center La Nuvola. That is in the contemporary district of EUR where the race, which will be in April 2018, will take place. 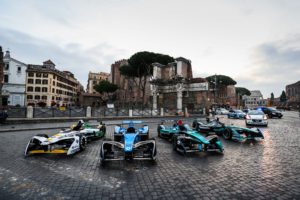 The location and circuit configuration were unveiled for the first time. Rome features the second longest track on the calendar, behind only Marrakesh.

The Circuto Cittadino dell’EUR consists of 21 turns and is 2.86km in length. 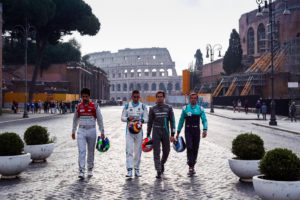 “I’m excited to present the first-ever E-Prix in Rome. A spectacular event that will engage and entertain the Roman citizens, as well as create a number of benefits for the city. Seeing and hearing the Formula E cars on the streets of a place like Rome, for me will be a truly unforgettable experience. The circuit looks long and challenging for the drivers. I’d thank everyone who made it happen, bringing Formula E to the Eternal City. This demonstrates the unity of intent to promote alternative and clean energy solutions, speeding-up the transition thanks to the developments and innovations that characterise our series.”

“Rome is a key protagonist in the international landscape with EUR setting the scene for the first Formula E race in Italy. The future means sustainable mobility, innovation and above all respect for the environment. With this event, Rome will benefit from a positive economic impact as other major cities in Europe and around the world have experienced. Formula E will bring investments and benefits to the city with its legacy program, such as new streets and electric charging stations. Our desire is to see more and more vehicles powered by clean energy circulating in Rome.”

The fourth Formula E season will start at the beginning of December. The first two rounds will be on December 2-3 in Hong Kong. After that the championship will continue in January 2018 in Marrakesh.

The Rome ePrix will take place on April 14th and it will be seventh round of the championship.

Lining the Circuto Cittadino dell’EUR will have a number of grandstands, which will have a combined capacity of approximately 10,000 seats. They will offer premium views of the track, as well as giant screens showing all the action from around the circuit.

As well as the grandstands, the Allianz E-Village at La Nuvola – will be open to the public. Further details will be announced in due course.

Tickets will go on sale over the coming weeks, priced at just €35 for adults and €1 for children under the age of 16, while there will be discounts for students and over 60s.

Lewis surprised that no one had his pace