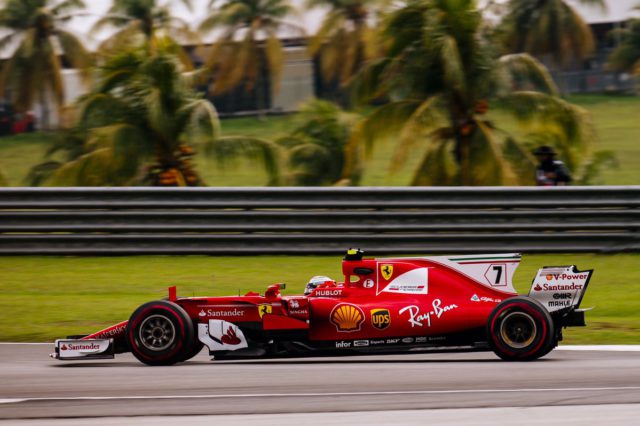 Kimi Räikkönen led a Ferrari 1-2 during final practice for the Malaysian Grand Prix, ahead of Red Bull and Mercedes. But there was concern for Sebastian Vettel car late on. He slowed and pitted. The German had set the second fastest time in the morning run. But was forced to cut short his running early after returning to the pits stuck in second gear.

Initial examination of the car pointed to an electrical problem and in a bid to avoid potential repeat problems in qualifying or the race, a decision was to fit a new power unit.

Räikkönen posted a best time of 1:31.880 on the Super Soft tyre, 0.162s clear of Vettel. Red Bull again finished as Ferrari’s nearest challenger, but only with one car, as Daniel Ricciardo slotted ahead of Mercedes pair Valtteri Bottas and Lewis Hamilton.

After a challenging first day, Mercedes’ drivers went in different set-up directions, Bottas sticking to the new aero spec, and Hamilton reverting to the previous version. Bottas lapped two-tenths quicker than Hamilton, who was nonetheless “quite happy” with his car’s balance, according to Mercedes.

Max Verstappen, the slowest of the lead group, was involved in a strange incident with Jolyon Palmer. Verstappen slowed at the final corner. He prepared for a timed effort, with Renault rival Palmer locked up and sliding into the back of him.

Stoffel Vandoorne will drive for McLaren in 2018