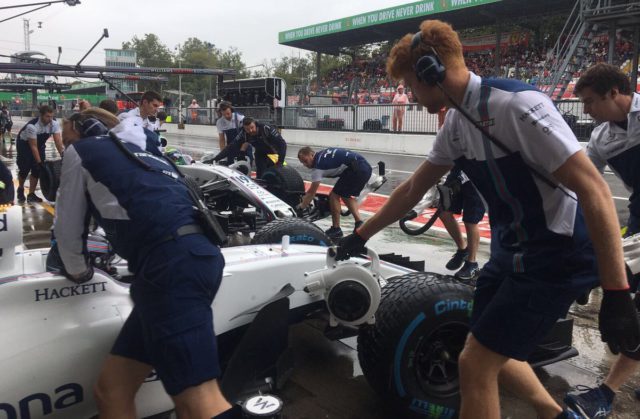 Felipe Massa led a Williams 1-2 in a rain-delayed final practice session for the Italian Grand Prix. Only a quarter of the planned track time went ahead, and just 7 drivers posting a lap time.

Heavy rain and thunderstorms arrived in the Monza area on Friday evening, with further rain falling through Saturday morning. This left the circuit soaked.

As a result of standing water and rivers, the Safety Car driver Bernd Mayländer carrying out several track evaluations. Shortly before the scheduled start of final practice, at 11:00 local time, Race Control communicated an “indefinite” delay, with the clock ticking.

Race Director Charlie Whiting commented that the “risk of aquaplaning on the pit straight is high”. With the track “still too wet”. Some five minutes later, Mayländer completed another recce of the track, after which it was determined that FP3 would finally get underway at 11:44.

All drivers went out for at least one installation lap. They were using Pirelli’s blue Wet tyre, but only seven stayed out to get lap times on the board. Amid extreme spray, Massa posted the quickest effort, clocking a 1:40.660, to finish two-tenths clear of rookie team-mate Lance Stroll.

Nico Hülkenberg and Carlos Sainz Jr. got within a second of Massa’s time. They also completed a handful of laps. Jolyon Palmer (Renault), Marcus Ericsson (Sauber) and Daniil Kvyat (Toro Rosso) were the other drivers to set times in the tricky conditions.

Hyundai will not get carried away with its strong Friday result

Matton: Lefebvre and Breen need to confirm the progress they have made this season