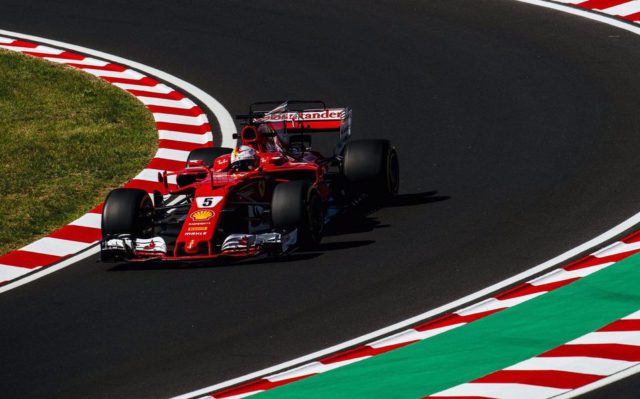 Vettel and team-mate Kimi Räikkönen both dipped under Rubens Barrichello’s record, posted back in 2004 in the early stages, before improving further. Gaining around seven-tenths between laps, Vettel ended with a 1:17.017.

He was half a second clear of Räikkönen, and the best part of a second up on the rest of the field.

Valtteri Bottas was third for Mercedes, nine-tenths adrift, with Lewis Hamilton making several mistakes en-route to fifth. He was behind Max Verstappen. Daniel Ricciardo, having topped Friday practice, endured technical trouble in the other RB13. He ground to a halt after he tried to change from fifth to sixth gear, leaving him eighth.

McLaren again put both cars in the top 10, Stoffel Vandoorne improving to sixth late on. Fernando Alonso posting the ninth-fastest time, before stopping at the pit entry. Nico Hülkenberg continued to lead Renault’s charge in seventh, while team-mate Jolyon Palmer bounced back from a difficult Friday to take 10th, just 0.257s behind.

Hülkenberg, though, will take a 5-place grid penalty for a gearbox change. Toro Rosso and Force India squabbled over the next four positions. Carlos Sainz Jr. leading Esteban Ocon, Daniil Kvyat and Sergio Pérez and the Haas drivers.

Felipe Massa was cleared for FP3, after feeling unwell on Friday. Though his participation in the remainder of the event is in doubt, as he ended his session early.

TV footage showed mechanics making changes to his car before the chequered flag, with a new set of pedals being prepared. The reserve driver Paul di Resta waits on standby. Massa wound up 17th, ahead of rookie team-mate Lance Stroll.

INITIAL CLASSIFICATION (END OF FP3): @ScuderiaFerrari in the box seat ahead of #Quali #HungarianGP ?? #F1 pic.twitter.com/Ch9iZImP4j

Toyota and Tanak happy with a perfect weekend in Finland

Tanak supreme in Argentina as rivals have no answer