Sam Bird secured an outstanding second win from pole position during the Formula E New York ePrix to round off an incredible weekend for the DS Virgin Racing team. The team won its largest ever points haul.

In front of another sell-out Brooklyn crowd, the team began the day by making it a double pole position, this time through Bird after teammate Alex Lynn’s stunning P1 debut on Saturday.

As the race got underway, Sam Bird lost out to Mahindra’s Felix Rosenqvist into the first corner, holding onto P2 while Lynn was pushed down the order from his P7 grid slot

Lap nine then saw a brief stoppage via a full course yellow, bunching up the pack and gifting Bird a great opportunity to get on the back of the leader. Full of confidence, he did just that, making an identical move at the same hairpin as he did yesterday to take the lead.

Meanwhile, Lynn’s race sadly finished due to an electric issue. That brought once again bringing out full course yellows and presenting a tricky pitstop period as Mahindra – running either side of Bird – looked to get the undercut. The DS Virgin Racing team were quick to react though and a neat pitstop a lap later saw him return out in front as racing resumed.

From then on it was a case of managing the gap and energy – in the extended 49-lap race. He did it faultless to cross the line with a sizeable 11-second margin and pick up a combined 56 points for the team for the doubleheader weekend.

It’s one small step for man, one giant leap for a Bird! Congratulations once again to @sambirdracing Amazing weekend, amazing feeling ! pic.twitter.com/q7meFLjYOH 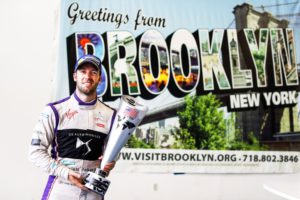 „I’m still in shock!”, said Bird who now has five wins to his name

“What a weekend it’s been and what a car the DS Virgin Racing guys have given me. Being a longer race today I thought it would be hard on energy but we managed it so well. The pitstop was a key point but we timed it well to just get out in front. I’m just delighted for everyone in the team, especially by engineers and mechanics, who have worked so hard for this.”

Lynn said: “I’d like to thank the DS Virgin Racing team for giving me the opportunity to race this weekend. I’m very proud of what I achieved, especially with the pole position, and very happy for the team with the results they got.”

Team Principal Alex Tai added: “It’s been an absolutely fantastic weekend for the team and all our partners”

“To be the first team to win in New York is incredible but to do it again is unthinkable! Sam and Alex both did an incredible job, as did all the mechanics and engineers, and showed the true potential of the car. Now it’s on to Canada and to end the season on a high.”

Another victory! We’re going to have to light @EmpireStateBldg up again! We’ll send our reserve driver @richardbranson over there now… pic.twitter.com/iDXgtyjsr4

Hyundai with an upgraded aerodynamic package for Spain

Marquez with a record-breaking pole position at Silverstone