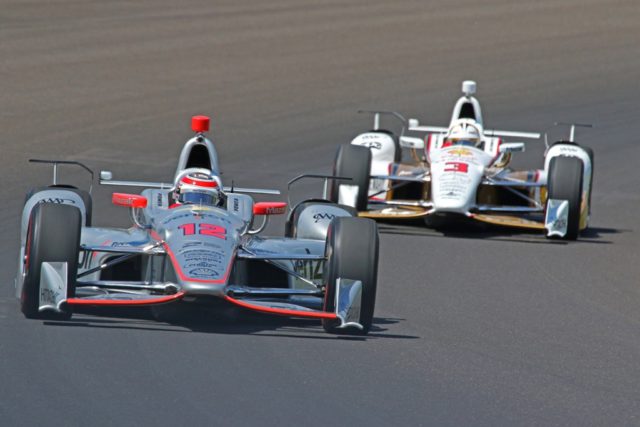 Warm and windy conditions didn’t prevent Verizon IndyCar Series drivers from logging more than 6,000 incident-free miles at Indianapolis Motor Speedway on the second day of practice for the 101st Indianapolis 500 presented by PennGrade Motor Oil. When the checkered flag waved, it was a pair of Team Penske drivers – Will Power and Helio Castroneves – atop the speed chart, followed closely by Gabby Chaves with newcomer team Harding Racing.

Power, winner of Saturday’s INDYCAR Grand Prix on the Indianapolis Motor Speedway road course, put his No. 12 Verizon Team Penske Chevrolet at the top of the time sheet with a mid-afternoon lap of 224.656 mph on the 2.5-mile oval. Power’s best finish in nine previous Indianapolis 500 starts was second in 2015. The 36-year-old Australian is looking to do one better on May 28 and give team owner Roger Penske a record 17th Indianapolis 500 victory.

“Roger definitely just puts everything into this race,” said Power, the 2014 Verizon IndyCar Series champion. “As a team, I think we did a lot of homework in the offseason for this race. We tested here twice, so you know we’re getting the most out of our package. I know Chevy is working really hard and obviously you can see that our speeds are pretty good right now.”

Castroneves jumped into second during the hectic final hour of practice. The three-time Indianapolis 500 winner said the importance of the race is symbolized by the fact that the team owner, who serves as Castroneves’ race strategist, is spending the week at IMS instead of attending to his many business interests.

“He’s staying here all week, which shows the commitment that he has and it shows what he wants,” Castroneves said of Penske. “It’s another (Indy 500) win. And it’s not just because his team has a lot that he’s going to settle down. He’s going to continue collecting victories and we want to continue hopefully getting him that kind of result.”

Chaves was elated to turn a top lap of 223.991 mph among his 87 laps today in the No. 88 Harding Racing Chevrolet after being limited to just six circuits around the iconic oval Monday

“We did, I think, three laps on track and then three more out and in (Monday), and that wasn’t good,” said Chaves, the 2014 Indy Lights champion who has competed in the last two Indianapolis 500s. “Obviously, our guys were disappointed that we didn’t really do any laps. Today (we) had to kind of bounce back from that and right away work on the car and improve it and show some speed.”

“We’re happy. Obviously, we’ve still got plenty of work ahead of us. I think if we just keep doing what we’re doing, we should be able to be in a good spot for the race.”

The only caution periods of the six-hour session came for debris and track inspections. It allowed the 32 drivers to turn 2,404 laps, nearly 1,100 more than on Monday’s opening day. Rookies Zach Veach (No. 40 Indy Women in Tech Championship Chevrolet) and Jack Harvey (No. 50 Michael Shank Racing with Andretti Autosport Honda) completed their rookie orientation programs and are cleared for full competition the rest of the month. They join Ed Jones and two-time Formula One champion Fernando Alonso – both having already completed the rookie assessment – as first-timers in the field.

Alonso ran the most laps of anyone on the day, 117, as he worked to become comfortable racing in traffic

The driver of the No. 29 McLaren-Honda-Andretti Honda finished 24th on the speed chart with a top lap of 221.029 mph.

“It felt OK, it felt as I expected,” Alonso said. “Obviously, here it’s very important to keep close to the car in front of you, to take the benefit from the next straight. It was useful. I’m on the best team for that; we are six cars and we were running together.”

Team owner/driver Ed Carpenter posted the fastest lap without an aerodynamic tow from a car in front of him, at 222.842 mph in the No. 20 Fuzzy’s Vodka Chevrolet.

“I’m still happy with the car,” said Carpenter. “Everyone probably got a little over-excited about the speed charts (Monday, when he was third). But I think we’re better than what they showed today. We’re just working through our program.”

WATCH: Highlights from Day 2 of the 101st #Indy500. Cars will be on track tomorrow at Noon ET for Day 3! Watch on https://t.co/1I2XeiVHry pic.twitter.com/KFdmio0FIH