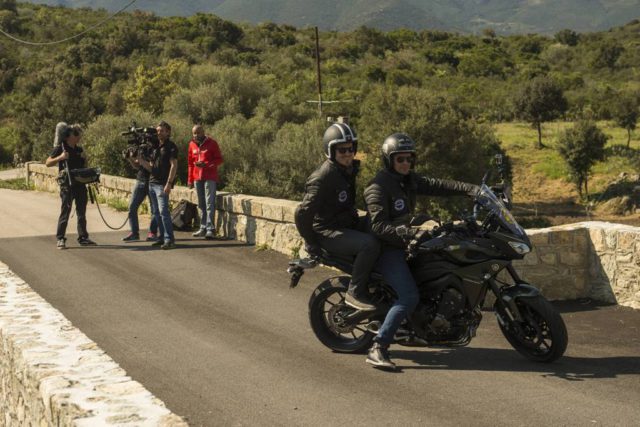 Hyundai driver Thierry Neuville from Belgium made it four manufacturers (and four nationalities) winning the first four rounds of the 2017 World Rally Championship, following one of the most intense rounds seen so far this year. Red Bull TV captured all the action along with a very special guest. He’s more used to tearing up the deserts in his go-anywhere cross country Peugeot 3008DKR, but Cyril Despres got a taste of something truly different when the Frenchman swapped his crash helmet for a microphone and joined the program hosts Mike Chen and Matt Wilson as guest reporter on the Tour de Corse. And he’s going to remember a lot of things about the three-day adrenaline rush on the ‘Island of Beauty’… 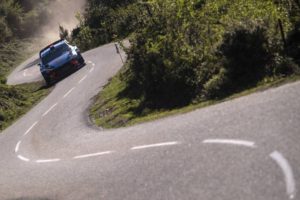 Riding a motorbike on the roads used for the rally

“On Friday, we made a film for the programme with a motorbike ride through the Novella stage. That was a first for me! In fact, this was only the second time I had ever been to a WRC rally. So it was really exciting just to ride through the stage and see what rally drivers experience. Very narrow roads and different types of surface – but at low speed. My passenger was Red Bull TV presenter Mike Chen: let’s just say that he’s a bit bigger than me, so when I brought the bike back they asked me why there was more tyre wear at the back than the front! Living the stages on a bike, my second home, was a great experience.” 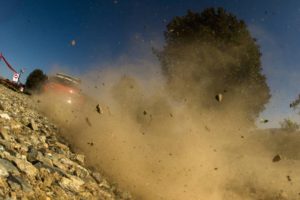 Being blown away by the speed of the cars

“The sheer speed of the new generation of cars is mind-blowing. You can’t really compare it to my Dakar Peugeot, which is rear-wheel drive and heavier, or even to the experience I had last year, when I drove the Citroen DS3 WRC on gravel. This is just something else. The sheer amount of grip, acceleration and braking that these cars have is phenomenal, so to experience it up close and see the cars connected to the road is very special.”

Working out just how competitive the WRC is

“Because my background is in cross country, I’m kind of used to measuring gaps in hours and days! Here, it’s amazing that you can have the top 10 drivers on a stage covered by 30 seconds. To have such tiny differences, with all the drivers going flat out, is incredible. One of my favourite elements of the Red Bull TV show is a 3D graphic that shows you how the time gaps between the drivers translate into distances. On one stage we saw that the winning advantage was just 59 metres after 30 kilometres! Then at the finish, the difference between second and third place was less than two seconds, while the difference between fourth and fifth was a tenth of a second! Unbelievable.” 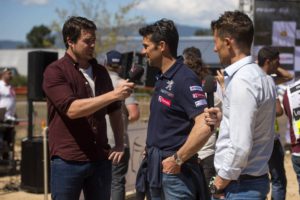 Sharing his world with Matt and Chenny

“I’ve had a microphone stuck under my chin a few times before, but this was my first time commentating. It was great fun to do it with Mike Chen and Matt Wilson, and it was also nice for me to share a little bit of my world with them. Chenny was at the Dakar for the first time this year, so he’s had a taste of what it’s all about, but it was all new for Matt. We had some fun times, just talking and chatting about cars, bikes and rallying; both WRC and cross country. I loved the whole atmosphere of the rally.”

Commiserating with Kris Meeke over a steak sandwich

“I know Kris Meeke from back home in Andorra, where he lives as well. And I love his attacking style: it’s actually quite the opposite from the way that I drive! I didn’t know he had retired from the lead with an engine problem until we saw the Citroen truck going to pick him up on Saturday. So we went to the end of the stage and managed to find him just after it happened. There was a van selling steak sandwiches, so he was having a steak sandwich and frites as a consolation! But in the end, he was quite cool about it. He was doing a great job in the lead, and these things happen in motorsport. You just have to accept it. But at least we could commiserate with him.”

Meeke took the lead on the opening day of the rally and was pulling out an advantage before an engine problem stopped him halfway through the opening day. This gave Neuville the lead, chased down by reigning world champion Sebastien Ogier. However, Ogier was delayed by a hydraulic problem and then an intermittent electrical fault on the final day of the rally. The Frenchman managed to seal the runner-up spot from Hyundai’s Dani Sordo by less than two seconds, while Neuville claimed his first win of the year by nearly a minute.

McLaren had an overall good race in Mexico according to Alonso