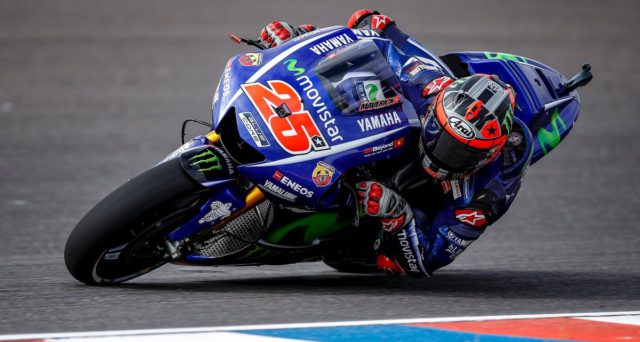 Maverick Vinales maintained his unbeaten start to the season as he controlled proceedings in Argentina. He headed a Yamaha 1-2, after initial leader Marc Márquez crashed out.

Vinales profited from a mistake by Márquez to cruise to his second victory of the campaign, increasing his title advantage to 14-points over team-mate Valentino Rossi, as Cal Crutchlow took third.

Marquez dominated the early laps of the race from pole position, storming clear of second-placed Crutchlow, opening up a two-second advantage in as many laps. Márquez, victor at Río Hondo in 2014 and 2016, continued to edge away up front but lost control of his RC213V on the approach to the left-hander at Turn 2 and crashed out.

Márquez’s premature exit handed the lead to Vinales, who had quickly worked his way forwards from sixth place on the grid.

Viñales overhauled Danilo Petrucci and front-row starter Karel Abraham, before slicing past Crutchlow to take second, which soon became first when Márquez crashed. From there, Viñales cruised clear of the Crutchlow/Rossi scrap to record victory, maintaining his perfect start to his Yamaha career, following on from his Qatar success.

Rossi trailed Crutchlow for much of the race but made his move with seven laps remaining, securing second position on his 350th Grand Prix start, with Crutchlow coming home third.

Álvaro Bautista was a fine fourth for Aspar in a race of high-attrition. The Tech 3 pair Johann Zarco and Jonas Folger moving through the pack to take fifth and sixth. Danilo Petrucci was seventh for Pramac, ahead of team-mate Scott Redding, while Marc VDS’ Jack Miller and Abraham rounded out the top 10.

Loris Baz encountered a grassy moment at Turn 1 but recovered to 11th, in front of Tito Rabat and Héctor Barberá, while KTM bagged its first points, Pol Espargaró and Bradley Smith 14th and 15th.

Suzuki’s Andrea Iannone classified down in 16th after being handed a ride-through penalty for jumping the start, while several riders encountered problems.

Dani Pedrosa suffered a similar exit to team-mate Márquez. As he bounced over the bobble at Turn 2 and crashed out while competing for fourth.

Andrea Dovizioso and Aleix Espargaró had been hanging onto the scrap for fourth. But both were eliminated at Turn 5, shortly after Pedrosa’s fall.

Dovizioso ran deep into Turn 5 and wiped out by the pursuing Espargaró. He lost control of the front end and slid into his rival, before rushing over to offer his apologies.

Jorge Lorenzo’s dismal start to his Ducati career continued. H crashed out on the opening lap after clumsily clipping Iannone on the exit of Turn 1. Alex Rins crashed at Turn 13 and retired soon after. Sam Lowes also failed to reach the flag, pulling into the pits mid-distance.

Monaco – One of a kind F1 race

Around the world solo on a Ducati Scrambler Desert Sled