Skoda works driver Pontus Tidemand thrilled thousands of his compatriots in taking victory at home in WRC2 at Rally Sweden. The Swede missed victory by a whisker last year, but in 2017 the 26-year-old and co-driver Jonas Andersson dominated at the only all-snow and ice rally on the WRC calendar. The Skoda Fabia R5’s dominance has now seen the car win 12 of the last 13 races in WRC2.

“I am proud of the whole team at Skoda Motorsport! Having opened the season with a one-two at the iconic Rally Monte Carlo, we had another perfect display in difficult conditions at the Rally Sweden,” said Michal Hrabánek. The Skoda Motorsport Director reserved special praise for his driving duo: “This year’s Rally Sweden was one of the fastest rallies on snow and ice in the history of the world championship. However, Pontus and Jonas were equal to all the challenges and produced a really impressive display in front of their home crowd.”

After a cautious start, the Swedish duo took the lead for the first time on stage four. They then gradually extended their lead. Whether on the night stage around the service park in Torsby, or the famous Vargåsen stage with the Colin’s Crest jump, Tidemand was in a class of his own in front of the thousands of fans that lined the 300 kilometres of special stage. He also showed great composure, driving on the safe side on Sunday’s final three stages to ensure he completed the win without any major complications. 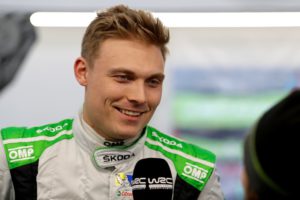 Pontus Tidemand was the fastest man on ten of the 17 special stages in Fabia R5 and won the Rally Sweden with a 51.8-second advantage over Finland’s Teemu Suninen. Third place went to Ole Christian Veiby who put in another impressive performance in a private Fabia R5.

“Fantastic. That is the highlight of my career so far. My first home win at the Rally Sweden in WRC2 is a dream come true. Last year we narrowly missed out on victory by just 14.7 seconds, but that has only made this success all the sweeter”, said Tidemand.

For Sweden’s Motorsport Athlete of the Year, this was the third WRC2 victory in the Skoda Fabia R5, following wins in Spain (2015) and Portugal (2016). And there is no sign of it being his last victory this year. “Our goal is to win the WRC2 title. We have made the perfect start,” said Tidemand. Tidemand now tops the overall WRC2 standings with 25 points, alongside Andreas Mikkelsen. The Norwegian won the opening round of the WRC in Monte Carlo, finishing ahead of his team-mate Jan Kopecký.

The successful start to 2017 saw the Fabia R5 enhance its reputation as the top car in WRC2. The high-tech, four-wheel drive car from the Czech Republic has now won 12 of the last 13 races. The next challenge awaits in the form of the Rally Mexico, from 9 to 12 March. Then Pontus Tidemand/Jonas Andersson will hope to prove their title credentials in the heat and on gravel, rather than in the cold and on ice.

10 of the most memorable moments in Pedrosa career

Rally Sweden and 1536 pieces of metal