And last week’s Rally Sweden was full of it. In fact, without this naturally occurring crystalline inorganic solid, there wouldn’t and couldn’t have been a second round of the World Rally Championship.

Based in Sweden’s ironically named Värmland – warm land – region, temperatures plummeted to minus 15 as the world’s fastest rally drivers took to the frozen forests to do battle.

Conditions were pretty much perfect for the WRC’s winter wonderland. And those conditions required a succession of weather events to come in precise order. First came the snow, heavy snow. Then rising temperatures, prompting a big thaw. But that melt needed to last just a couple of days before the mercury went south and deep south to deep-freeze the moisture in the super-quick gravel roads. This developed the ice layer on the road surface.

Ideally, it will then stay cold and snow for a couple of days, adding some powder on top of the track and building some snow banks for the drivers to lean on in the corners.

The last bit didn’t quite happen last week. But the ice? There was no shortage of that.

This year’s World Rally Cars have more power, torque, downforce and transmission control than ever before, but they still relied on age-old tech for getting from A to B; stage start to flying finish.

To be precise, there were 1536 reasons the drivers were able to perform at Rally Sweden. Without those 1536, it would have been a no-show in the snow. 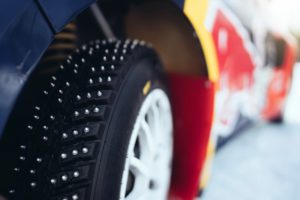 Each tyre on every corner of a World Rally Car was hand-fitted with 384 of these tungsten-tipped pins. In Swedish, tung sten means heavy rock. That tells you everything you need to know about the strength of the 6.5mms of stud protruding from the tread pattern.

Thanks to the hours of handiwork from the tyre technicians, the WRC heroes were able to dance on ice and put on a show which had to be seen to be believed.

Standing up in large parts of Scandinavia at this time of the year is a significant achievement, so deep and so slippery is the ice. Yet these drivers were turning in between the trees at 180kph.

When travelling at 120kph, each stud in the Michelin X-Ice North 3 hits the ground 16.72 times per second! #wrc #RallySweden pic.twitter.com/3WrJjBvjXa

Simply – if somewhat unbelievably – the grip last week is better than anywhere else in the season. The studs claw ferociously at rock-solid ice providing a mechanical element to longitudinal and lateral traction which simply can’t be replicated on any other surface.

In addition to the studded aspect, there remains a chemical action from the compound and construction of the tyre as well. In hard, icy conditions, the covers are stiff with little flex, helping to hammer the stud harder and deeper into the ice. But in heavy snow a much softer construction with a much more open tread pattern works best.

Rally Sweden winner Jari-Matti Latvala had plenty to smile about after his maiden win for the Toyota squad, but the Finn’s never happier than when he’s strutting his stuff atop the oxygen and hydrogen atoms.

“The feeling is like nothing else you get in this sport,” said Latvala. “Honestly, you can’t believe the forces you can put into the car. When you have thick, hard ice, you can accelerate so hard and brake so late, it’s more than on dry asphalt with a racing tyre.

“But it’s the lateral grip that’s the best. That’s so funny. When you are sliding the car in top gear at nearly 200kph and you know you have such amazing grip. You have to smile, it’s the best feeling in the world.”