Spa-Francorchamps is one of Formula 1’s historic races. Located deep in the trees, the circuit features fast bends, sharp elevation changes and boasts total unpredictability. Eau Rouge is amongst the most notorious of corners across any circuit in the world. With its 18% gradient, drivers hold tight and pray for grip through the left, right and left downhill then uphill combination which challenges car and driver alike.

Spa is the hardest circuit of the year for the Power Units. Over 67% of the 7km track is spent flat out, which translates as around 73secs per lap, the longest accumulative wide open throttle time of the year. The first period of sustained throttle is the climb from the La Source hairpin to the chicane at Les Combes. It takes around 25secs (1,852m) with the driver flat on the throttle throughout. The distance is only slighter shorter than a runway at Charles de Gaulle airport.

The track drops over 40m from La Source before climbing over 80m back to Les Combes, equivalent to a gradient of 1 in 4, or one of the steepest mountain climbs in the Tour de France. The descent compresses the internals but going over the crest of the hill, the vertical force is suddenly lifted and the parts unloaded, with the vertical forces switching to -3g. It can be equated to the feeling on a rollercoaster drop when your body feels compressed and pushed down into the seat but weightless when you go over a bump.

The turbo will be rotating at close to its maximum to keep pace with the high rotational speeds of the ICE. The altitude will further increase rpm. At its most extreme the turbo will be spinning at more than 95,000rpm or over 1,500 revs per second! 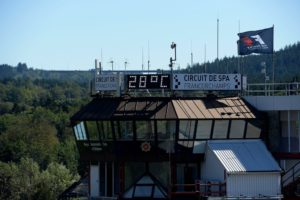 Spa is one of the most demanding tracks on the MGU-K. Each of the braking points comes after a long burst of power so the energy dissipated through the brakes is enormous. The best opportunity for the MGU-K to recover energy is the Bus Stop chicane, which the driver approaches at well over 300kph and brakes down to just 75kph.

High-speed flowing corners such as Pouhon and Fagnes are the best opportunities for the MGU-H to recover energy. It will feed this energy to the MGU-K and ICE on the next period of throttle through Blanchimont.

Soft (yellow) – Pale Lager – light in colour but heavy and bitter in taste.

Supersoft (red) – Flemish Red – a sour ale brewed in West Flanders; distinct in colour and has a real character.

Ultrasoft (purple) – Lambic – brewed in the Pajottenland region, dry and sour with potential for a sharp aftertaste. 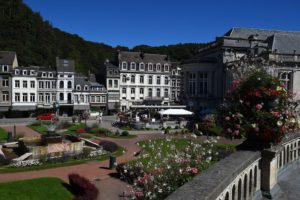 68 – (km) The longest tram-line in the world is the Belgian Coast Tram, running between the coastline on the French and Dutch borders.

400 – Brussels sprouts have been grown in Belgium for 400 years

History lesson Spa-Francorchamps is one of the most revered racetracks in the world. Its fast, undulating sweeps are a stern test for car and driver, and with an average speed approaching 233km/h/145mph, it’s one of the fastest laps of the season. 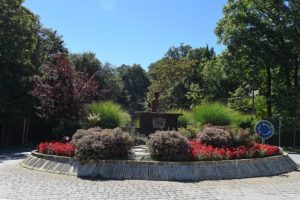 Surprising fact There are 480 guesthouses in the villages surrounding Spa-Francorchamps. But there aren’t many big hotels

Local speciality Mussels (moules) and French fries, or simply fries and mayonnaise. If you don’t like fries, you could try a waffle or some local mineral water. Thanks to its plentiful springs, Spa is known as the café of Europe

Weather Recent temperatures have hovered around 20 degrees and more of the same is expected over the grand prix weekend. Irrespective of temperatures, rain is always a possibility in this region of the Ardennes mountains 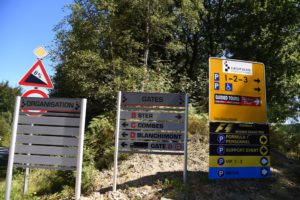 Tyre choice Purple Ultrasoft, red Supersoft and yellow Soft – the sixth time this combination has been used in 2017

Brakewear Low. There are nine braking events around the lap, but only three of them are heavy

Fuel consumption 2.27kg per lap, which is high

ERS demands Low. It’s a long lap and there are plenty of opportunities to harvest braking energy 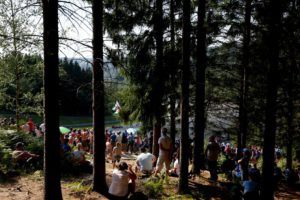 Grid advantage The short dash to Turn One reduces the emphasis on any grid advantage. Pole position isn’t on the grippy racing line; it’s on the right side of the grid, giving the pole-sitter the inside line for Turn One

DRS There are two DRS zones, on the approaches to Turns One and Five

Don’t put the kettle on… Last year’s race strategy was skewed by the red flag on lap nine, after Kevin Magnussen crashed at Eau Rouge. Race winner Nico Rosberg used a two-stop strategy – one stint on the Soft tyre, followed by two stints on the Medium – and the likelihood of a repeat this year won’t be known until after Friday practice, because Pirelli is taking its softest compounds to the race for the first time

Pitlane length/Pitstops 390m/0.242 miles (longest of the season: Silverstone, 457m/0.283 miles). A pitstop takes 20s, but the time loss to those on-track is relatively small because they have to negotiate the La Source hairpin

Safety Car likelihood 80 per cent, which is high. Most accidents at Spa are high-speed and take a lot of clearing up, but the weather can also bring out the Safety Car. A heavy downpour prior to the start of the 1997 race resulted in the sport’s first ever Safety Car start

Watch out for… Turn 10, a 180-degree double-apex left-hander. Last year’s entry speed was 290km/h/180mph; this year, with the extra grip produced by the 2017 cars, it’s expected to be even faster. The drivers need to be totally committed through here in order to be fast

“Spa is an iconic circuit and a great test for Formula One machinery, even more so this season. It’s the longest lap of the season with a mix of slow and quick corners, long straights and elevation changes: finding the right setup is always a challenge. There are some unique corners, like the Eau Rouge/Raidillon complex with its rapid compression and decompression, which will be asking a lot from the driver, the car and the tyres. There are also many long and fast corners putting big loads through the tyres: it will be important to understand how the compounds on offer, the three softest of the range, work in these conditions.”

“Usually, races in Spa are very entertaining: there are many overtaking opportunities, mistakes are easily punished and the weather can play a big part. It often rains and the extended nature of the circuit means you could be driving on a completely soaked track in one sector and on bone dry tarmac in another. Choosing the right strategy and being ready to adapt to the changing circumstances is crucial.”

Not a bad setting for the first week back at work ??

And that applies to helicopter pilots as well as drivers ? ?#F1 #BelgianGP pic.twitter.com/9OjCDaFf0n

Lorenzo quickest on Day 1 at Catalunya

Grosjean: Tire compounds number one priority for us to understand with the new package