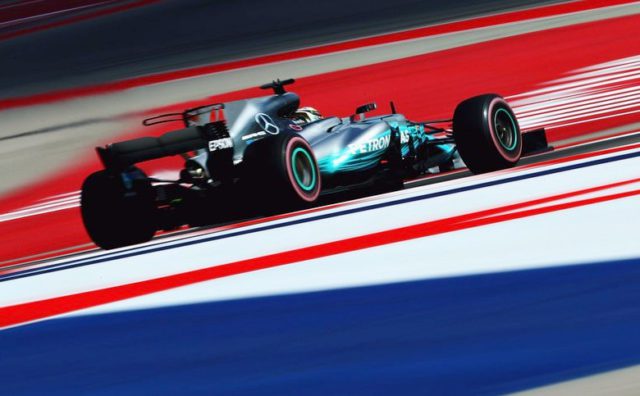 Hamilton clocked a 1m34.478s, which is a new track record, to beat Vettel by just 0.092 seconds. Valtteri Bottas was two tenths off the pace in third. Fourth was Kimi Raikkonen in Ferrari.

Red Bull slipping away from the front. Max Verstappen led Red Bull’s charge in fifth. He had a wild moment through the Esses. Daniel Ricciardo was ninth, unable to make a significant jump on Ultra Softs.

Williams featured in the top six, courtesy of Felipe Massa, as the Renault drivers, the aforementioned Ricciardo and Force India’s Sergio Pérez completed the top 10.

Esteban Ocon hit traffic on his final run en route to 11th, a couple of tenths down on team-mate Pérez, followed by Lance Stroll, who missed the early stages of running for an unspecified reason.

Kevin Magnussen was 16th for Haas, after team-mate Romain Grosjean lost control of his car at Turn 7 and slid into the gravel trap.

Grosjean was unable to rejoin the action, shaking his head as he walked away from the scene, with a Virtual Safety Car period required as marshals cleared the stricken VF-17.

Grosjean’s incident enabled Sauber pair Marcus Ericsson and Pascal Wehrlein to slot ahead. Daniil Kvyat was at the back.