Fernando Alonso was probably the most heralded rookie in the history of the Indianapolis 500. The two-time Formula One champion, who bypassed F1 Monaco Grand prix to fulfill a dream to drive in the Indy 500, started fifth, ran up front most of the day and led 27 laps in the No. 29 McLaren-Honda-Andretti Honda. Alonso’s race came to a premature conclusion with a mechanical issue after 179 laps. 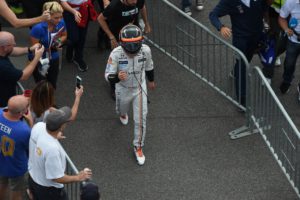 Fernando Alonso: “I was passing, watching the tower, saw the 29 on top of it. I was thinking at that moment if Zak [Brown] or someone from the team was taking a picture, because I want that picture at home”

“It was nice to have this competitive feeling, even leading the Indy 500, you know. One lap you put on the lead there, it was already a nice feeling. I was passing, watching the tower, saw the 29 on top of it. I was thinking at that moment if Zak [Brown] or someone from the team was taking a picture, because I want that picture at home.”

“Thanks to INDYCAR, amazing experience. Thanks to Indianapolis, to the fans. I felt at home. I’m not American, but I felt really proud to race here. Congratulations to Sato San, to Andretti. We have been sharing the last two weeks all the meetings in the morning, the meetings in the afternoon. Takuma was a lot of help, coming from F1. The last two laps I was on my knees really pushing Sato. Extremely happy for the final result.”

Although @alo_oficial finished the #Indy500 P24, he couldn’t resist drinking milk as he finished his final news conference #winnersdrinkmilk pic.twitter.com/caMFVnIBSG

Verstappen: It was very hard to manage the tyres