Red Bull drivers Max Verstappen and Daniel Ricciardo were fastest in FP2 for the Belgian Grand prix. Mercedes did not use the super soft tyre compound in the afternoon session and Nico Rosberg gave sixth time while Lewis Hamilton was only 13th.

The Milton Keynes team was pleased with its performance but remained cautious with its expectations for the rest of the weekend.

“It has been a very positive Friday for us”, Max said. “We showed great pace today in comparison with other teams, though it’s hard to say what Mercedes is like. Of course I’m happy to be first in front of so many Dutch fans but it’s still not qualifying and not the race so let’s see. When I went up to first position in the second practice the fans were all cheering me on with their flags. It definitely gives me a boost and motivates me a lot.”

Mercedes has an updated power unit for the Belgian Grand prix

The team has spent 5 tokens for the development but did not disclose what they were used for. Only Rosberg and Hamilton have the new engine for now.

Nico tried the Halo system in FP1. His comments after that were positive. The German driver noted that he had no visibility problems and actually set the session’s best time while driving with Halo.

The actual issues Rosberg and Hamilton had were with the tyres’ durability, especially the rears. Besides Lewis already has 30-grid places penalty after he used two new power units on Friday.

Ferrari also had a difficult day in Spa-Francorchamps. Sebastian Vettel complained of other drivers’ behavior and his car’s balance. Kimi Raikkonen’s pace with super soft was not good enough. The Finn also said there were issues with the handling.

Nico Hulkenberg was third fastest for Force India and his teammate Sergio Perez gave the fifth time in FP2. 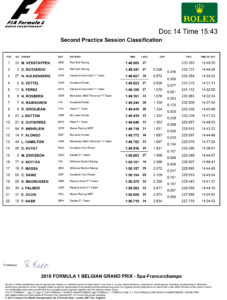 Nissan electrifies the city of Essen