Romain Grosjean finished just outside the points in his home Grand prix in France but he was encouraged by his Haas’ pace, The Frenchman hopes this will be the case in Austria as well.

Much is being made of this unprecedented three-race stretch of consecutive races. But for someone who makes his home in Geneva, does this slate of races actually work well for you since they’re all relatively close to home?

“I think it doesn’t change much, to be fair. If you’re living in Europe, wherever we’re going, it’s the same.”

You predicted that the pace you had in Canada would carry over to France. That seemed to be the case, and it seems to have given you a more real-world understanding of the updates the team brought to the Haas VF-18 in Canada. How has the car performed and what do you think that portends for the Austrian Grand Prix?

“At the Austrian Grand Prix, we were fast last year, so I’m very much looking forward to going back there this year. It’s a cool circuit, nice location, and the car was working very well in France, so I’m very happy with that. Hopefully, that’s going to keep being the case in Austria, and at Silverstone, and some more, because I think we’ve got the potential to do that.”

You come into Austria with back-to-back top-10 finishes in the Austrian Grand Prix, specifically, sixth last year and seventh in 2016. While past performances aren’t always indicative of how you’ll perform in this year’s car, does it at least provide a mental advantage in that you know what you need out of the car to be successful at the Red Bull Ring?

“I think we always know what we need from the car. The last two years have been good in Austria. It’s a circuit I quite like, and it’s a nice place to be racing. Hopefully, it’s going to be the same case again, and we can really score some big points and come back and fight in the constructors’ championship.” 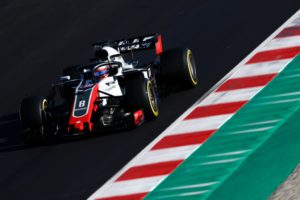 How helpful is it to have back-to-back grands prix where the same tire compounds are being used? Or in this case, is there carryover in tire data between France and Austria since the tires used in France were thinner compared to the ones you’ll use in Austria?

“The tires are going to be a bit different with the different tread size. We now have a much better understanding of the tires in general. It’s clearly a key to performance, and the guys are doing a great job helping us find what we need.”

The Red Bull Ring is a relatively short circuit, but its layout covers a wide range of conditions. Is it akin to some other tracks in Formula One or is it unique?

“It’s a funny place to race being in the middle of the mountains. The circuit is very short. The lap time is almost like Monaco. There are some overtaking opportunities. I like going there, and the surrounding area looks a lot like Switzerland.”

Do you have any milestones or moments from your junior career that you enjoyed at the Red Bull Ring?

“The first time I raced the Red Bull Ring was in Formula One in 2014. I have no moments there from my time in the junior categories. It’s a track I quite like and I’m very much looking forward to it.”

What is your favourite part of the Red Bull Ring?

“The two last corners. It’s very high speed going down the hill. There’s the compression halfway through the corner and it gives you a lot of grip, and that’s really nice.”

Explain a lap around the Red Bull Ring, especially now after having competed there with the faster, current-generation car.

“The biggest difference is the high-speed corners – five, six, seven, eight and nine – the whole of the last sector. You carry much more speed and it carries such a good feeling. With these cars, it’s faster and even better. I’m very much looking forward to going there and racing.”

Sébastien Ogier: In Sweden there are no margins for error

Play a game of drones with the Jaguar XJ