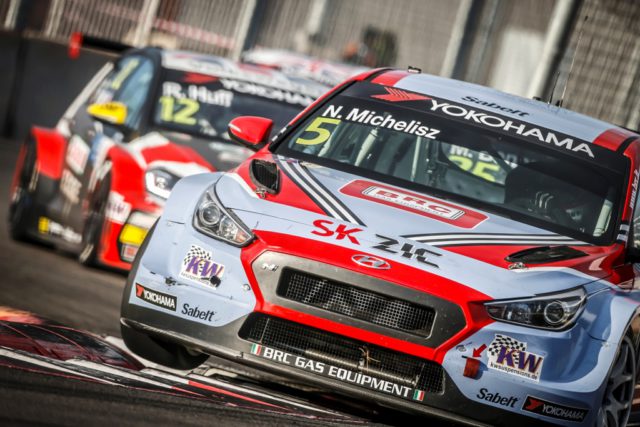 Three races and a whole heap of action marked the start of a hugely exciting era for international motorsport as the WTCR – FIA World Touring Car Cup presented by OSCARO fired up in Morocco earlier this month. While Gabriele Tarquini did the bulk of the winning on the streets of Marrakech for the Hyundai-powered BRC Racing Team, his team-mate and home hero Norbert Michelisz will be gunning for glory when the Hungaroring hosts the WTCR from 27-29 April.

Michelisz, who lives in Pécs in southern Hungary, endured a torrid weekend in North Africa. A fire in qualifying and a wheel falling off his Hyundai i30 N TCR were among the problems he encountered. But at home, the 33-year-old will be determined to get his title challenge back on track.

“It was a pretty unlucky weekend in Morocco, but I still got important points,” said Michelisz. “We have 27 races ahead and nothing is lost. I’m very motivated for my home race.”

As well as double Morocco winner Tarquini, one driver Michelisz will be particularly eager to beat at the Hungaroring is Yvan Muller. He upset the Hungarian fans when he appeared to allow Tiago Monteiro to overtake him in the 2016 season finale in Qatar. The move effectively gifted the Portuguese – the four-time World Touring Car champion’s close friend – third place in the final standings at Michelisz’s expense.

At the same fixture 12 months later when Muller appeared in a factory Volvo Polestar line-up. The aim was to boost lead driver Thed Björk’s title shot. A weekend of woe wrecked Michelisz’s chances. But the presence of Muller on the grid simply riled Hungarian fans in their thousands. And their dislike of arguably touring car racing’s most successful driver boiled over three weeks ago when Michelisz and Muller collided at the start of Race 3 in Morocco.

But World Touring Car champion Björk has called on fans to show respect to all drivers. Yvan Muller’s team-mate doesn’t want fans to “push the limit” in their support of Michelisz over other drivers. Particularly his fellow YMR driver and boss, who has received a number of online comments.

“All the fans in Hungary that follow motorsport are really good,” said Swede Björk. “They are so passionate for Norbert, the atmosphere is fantastic with the air horns and this is what I like. But some fans are a little too fanatical. They should push to a certain level but not push it too hard.”

Given the bulging grid of WTCR racers, Michelisz’s focus won’t just be on Muller.  “Racing in front of the Hungarian fans is amazing,” he said. “It’s always huge pressure in the week before the race. But as soon as I jump out of the car after the last race I cannot wait for the next year to be back in the car racing in front of my fans. I hugely appreciate all the support because it’s really special to have these people standing behind me. No matter what happens they are 100 percent there and supporting me. It gives me an extra boost many times and extra energy, especially when things are not really going my way.”

With a rulebook promoting corner-by-corner overtaking, a packed grid featuring four world champions and a host of national and international touring car title-winners, an abundance of young stars, three ex-Formula One drivers and seven customer racing brands, the stage is ready for a thrilling spectacle at the Hungarian Grand Prix venue, which is a host of the FIA World Touring Car Championship from 2011-2017.

In an intriguing twist, WTCR – the new name for the WTCC – gets three races per weekend, plus a second qualifying session. There’s also the ground-breaking TAG Heuer Most Valuable Driver award. It goes to the racer scoring the most points during a weekend. There is live Race 1 coverage on Facebook and at OSCARO.com. Fans in Hungary will have live coverage of all races on M4 Sport, while two local young stars – Dániel Nagy and Attila Tassi – received wildcard entries in recognition of their talent and potential.

Raikkonen: It was my mistake, I took the 10 seconds and kept fighting