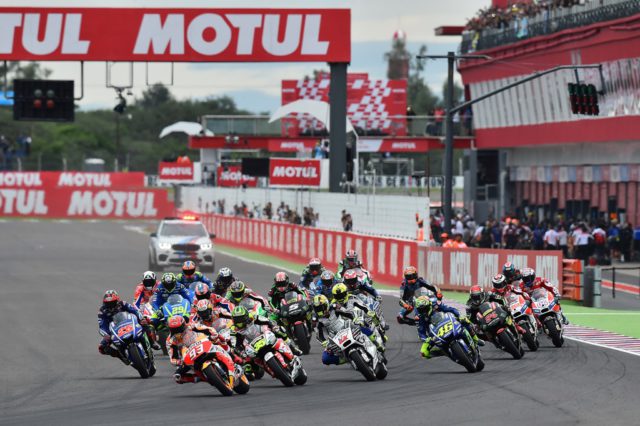 The MotoGP championship is in South America for the Argentina Grand prix at the Autódromo de Termas de Rio Hondo. Located in the province of Santiago del Estero in the north of Argentina, the circuit was designed by Italian Jarno Zaffelli. The brakes chosen by all of the teams and riders in the premium class are also Italian, Brembo naturally.

Every year, Termas de Rio Hondo hosts dozens of car competitions. So when the MotoGP bikes land in Argentina, they face a very dirty track. In the first free practice session of 2016, there was a great deal of sand on the asphalt and the lap times were at 1’43’’-1’44’’. These times were reduced by more than three seconds less than 24 hours later and by another second in the Q2.

According to Brembo technicians, the Autódromo de Termas de Rio Hondo falls into the category of circuits that present a mid-level of difficulty on the brakes. On a scale of 1 to 5, it earned a 3 on the difficulty index, the same score given to eight other tracks including Losail, which hosted the season’s inaugural race.

The demand on the brakes during the Argentina Grand prix

The 14 curves on the track correspond to eight braking points, three of which are on the T4. Despite these delays, the T4 remains the fastest of the four split times that the track is divided into. Only Phillip Island, with six braking sections per lap, and Spielberg and Sachsenring with seven each have fewer braking sections than Termas de Rio Hondo.

Each lap, the riders use their brakes for about 30 seconds, the same amount of time spent braking in Barcelona and Misano. The total time spent braking during the entire race is 12.5 minutes, which is 30% of the overall duration of the distance. The average peak deceleration per lap is 1.11G and this statistic would be higher if it weren’t for the quick braking needed on curve 11 (from about 120 mph to 99 mph), that with 0.6G lowers the average.

Summing up all of the force applied by a rider on the brake lever from the starting line to the checkered flag, the result skims 1,984 lbs. Only at Phillip Island is there less physical effort required of the drivers. MotoGP bikes have Brembo 320mm (12.6’’) or 340mm (13.3’’) carbon discs while Superbikes use steel discs. So even if the physical demand is low for MotoGP, Argentina demands more force from the MotoGP riders than Superbike riders: about 1322 lbs. in Round 1 in Australia, 1697 lbs. in Round 2 in Thailand and 1807 lbs. in Round 3 in Aragon. 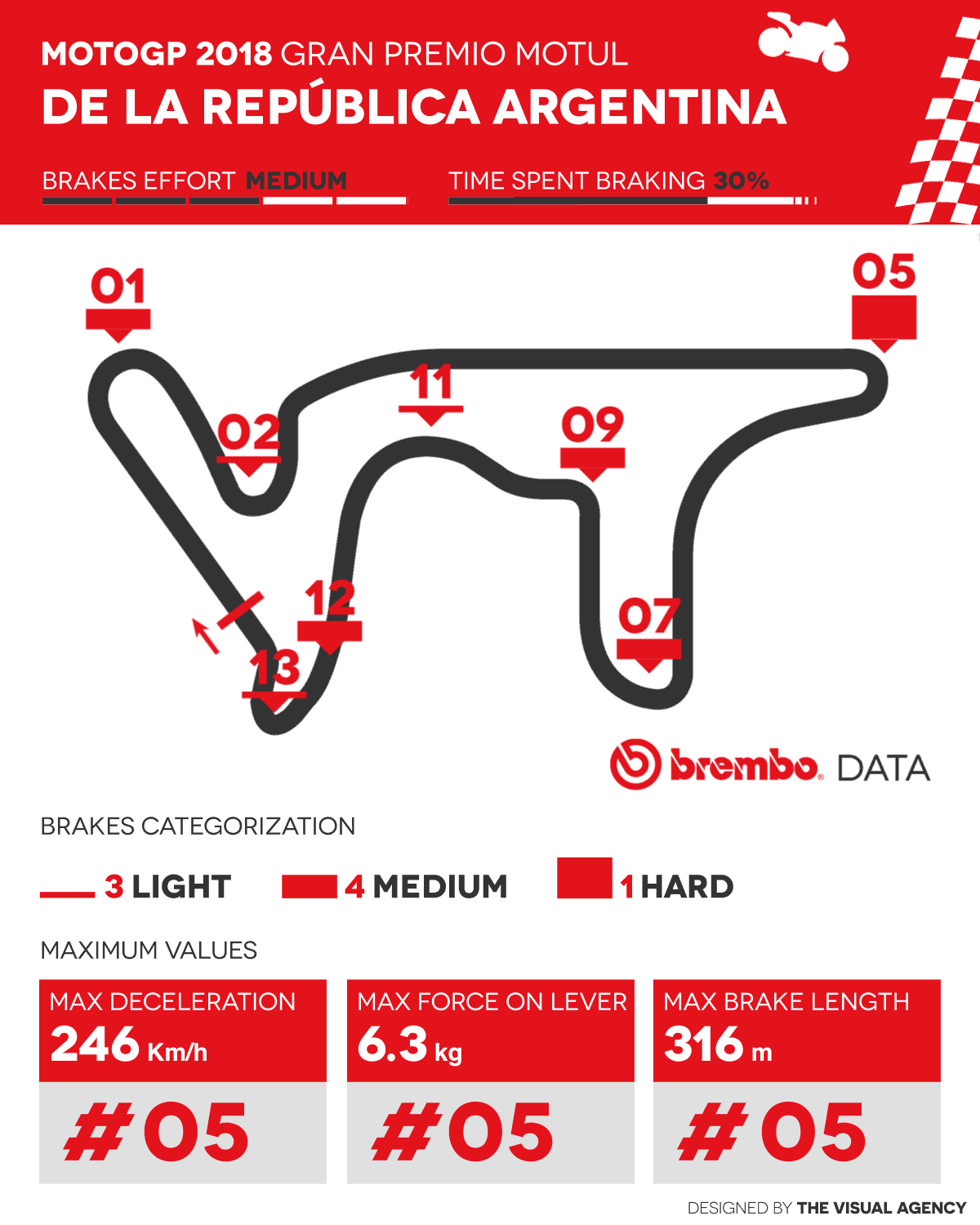 Of the eight braking sections at the Termas de Rio Hondo, only one is very demanding on the brakes while four are of medium difficulty and three are light.

Curve 5 is the most challenging because there is a 1176-yard straightaway before it where the MotoGP bikes get up to 201 mph. This small hairpin turn forces the riders to go down to 48.5 mph, laying on the brakes for 6.1 seconds and applying a load of about 13,9 lbs. on the lever for the Brembo master cylinder. In that precise moment, the pressure of the Brembo HTC 64T brake fluidreaches 10.9 bar, which is 2.5 times the pressure of a can of Coca Cola. While braking, the bikes travel just over 345 yards, which is five times the distance Diego Maradona went while dribbling in the 1986 World Championship to score the goal of the century.

Among the curves that present medium difficulty, it is worth mentioning the first one after the start line because of its 262 yards of braking space. The bikes go from 168 mph to 65.9 mph, but the deceleration is just 1.2G in comparison to the 1.5G at turn 5. On the other hand, 1.2G is much higher than the 0.9G many street supercars experience in braking.

The last time a 500cc MotoGP bike without Brembo brakes won the Argentina Grand prix was in 1982. In 1987 in Buenos Aires, Eddie Lawson took first place with Team Agostini’s Yamaha, which he had entrusted to Brembo brakes as of one year prior. In the 1990s, Mick Doohan with Honda won the race three times. He benefited from the thumb master cylinder which Brembo engineers built after the rider’s terrible accident at the 1992 Dutch GP.

Riders with Brembo brakes won also the four editions of the race at Termas de Rio Hondo: two victories for Marc Marquez, one for Valentino Rossi and Maverick Viñales. 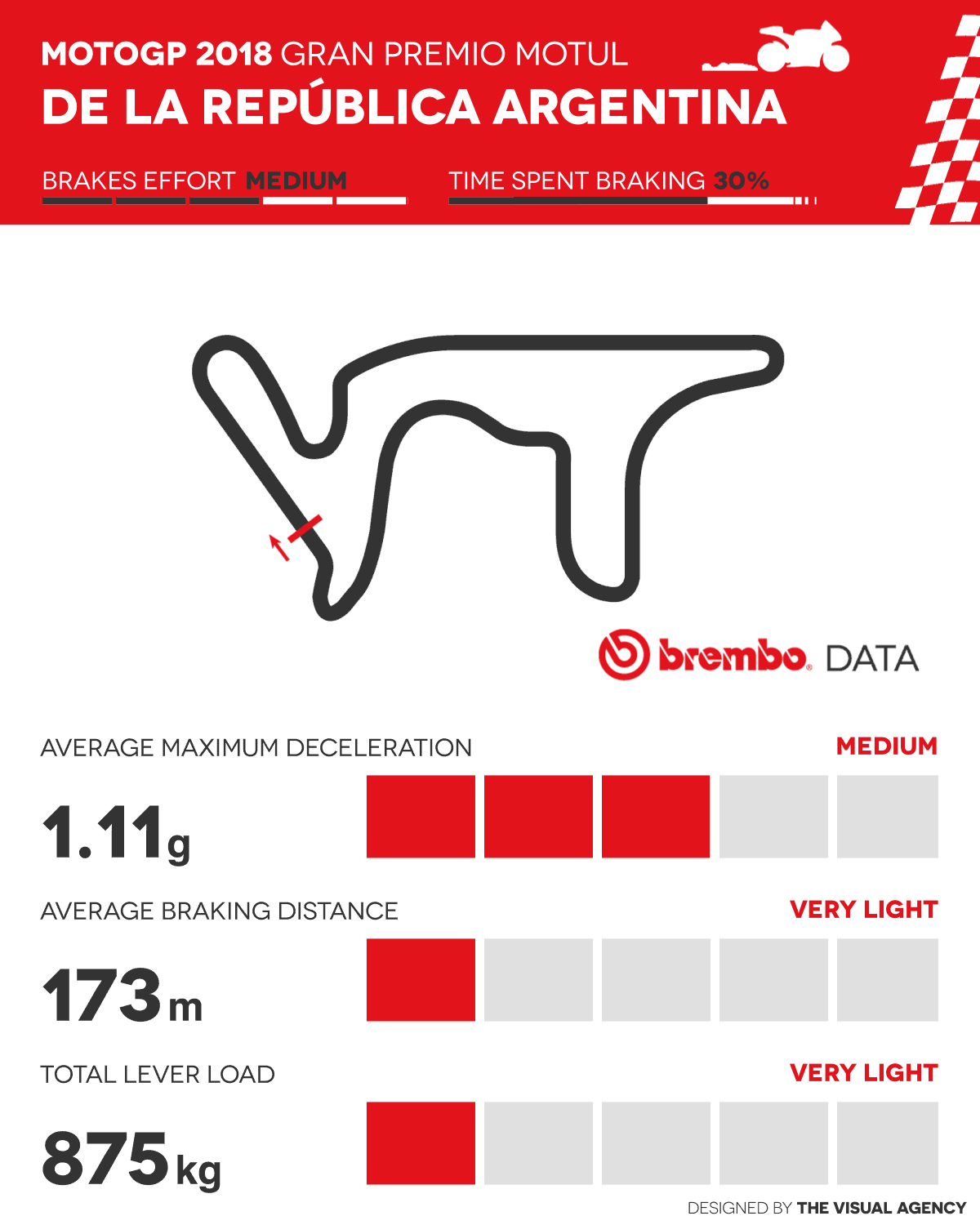 Hayden Paddon: Argentina will be the real start of my season