The all-new 2018 Nissan LEAF became the “2018 World Green Car” at the 2018 New York International Auto Show. LEAF is the icon of Nissan Intelligent Mobility. That is the company’s vision for changing how cars are powered, driven and integrated into society.

LEAF is the first all-electric vehicle winning the World Green Car award since the category’s inception in 2016. The 2018 model went through extensive reinvention for its second generation while receiving even more exciting features. Available in showrooms today, the new Nissan LEAF combines greater range with a dynamic new design and the latest Nissan Intelligent Mobility features including ProPILOT Assist, e-Pedal, automatic emergency braking and more. 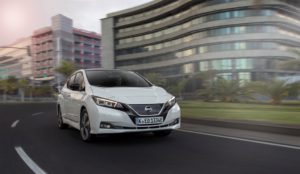 “We’re very proud that since Nissan LEAF launched in 2010, we’ve been able to put more than 300,000 zero-emission electric vehicles on the road worldwide, helping to reduce carbon footprints around the globe”, said Daniele Schillaci, Executive Vice President at Nissan Motor. “We’re honoured to be recognized by this esteemed jury and proud to continue to expand the vision of Nissan Intelligent Mobility.”

Plenty of room in the back seat in the All-New 2018 Nissan LEAF. #NissanLEAF #SimplyAmazing pic.twitter.com/J4tm9Q0X48

The 2018 LEAF rose to the top among a list of five initial category entries and was the stand-alone EV in the running. Jurors considered the vehicle’s overall environmental impact including tailpipe emissions and fuel consumption upon selecting the overall winner.

The previous-generation Nissan LEAF became “World Car of the Year” in 2011. It remains the only pure electric vehicle to win that award in its 14-year history while LEAF, in general, is the best-selling electric vehicle in the world.

Recently Nissan North America announced its collaboration with Walt Disney Studios Motion Pictures for the film “A Wrinkle in Time”. The movie’s on the classic 1962 novel by Madeleine L’Engle. The film’s star cast includes Oprah Winfrey, Mindy Kaling, Reese Witherspoon, Chris Pine and Storm Reid. The LEAF appears in the film while the company works with Walt Disney and director Ava DuVernay to promote the “Searching for the Next Visionary Filmmaker” contest.

The new Nissan LEAF took its first honours at the end of 2017. Then it took awards in two categories. The first was “CES Best of Innovation award winner for Vehicle Intelligence”. The second – “Self-Driving Technology and CES honoree for Tech for a Better World”.

The brand states that the new Nissan LEAF is the most advanced and accessible 100% electric vehicle on the planet. The all-new LEAF offers a significant update over the previous model. It has a dynamic new styling, advanced technologies and a higher capacity drivetrain which delivers significant increases in both range and power.

The 2018 LEAF is also the first Nissan model in Europe to feature Nissan’s autonomous ProPILOT technology as well as e-Pedal, which allows drivers to start, accelerate, decelerate and stop – simply by increasing or decreasing the pressure applied to the accelerator.

The German rally secrets according to Neuville: a good set-up, confidence, precise pacenotes