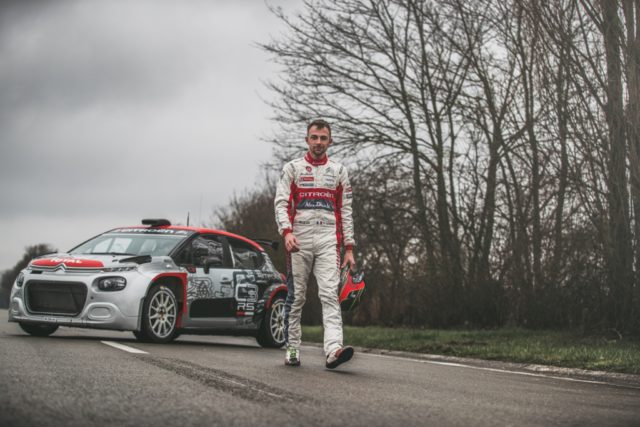 2018 is set to see the competitive debut of the R5 version of Citroen’s city compact C3. This time the C3 R5 is aimed at the customer racing market. Citroen Racing made this car for the WRC2 – the feeder category to the WRC – and the various FIA regional championships (ERC and MERC), as well as in the wide array of national championships. The team has undertaken a root and branch review of the design, producing a radically different car to its predecessor.

Led by Olivier Maroselli, the team of twenty or so people involved in the project started from scratch

A guidance for this approach was also the fact that the standard in the category is higher than ever before. There are several high-profile manufacturers seriously involved. The main challenge concerns the regulations, which are much more restrictive than in the WRC as regards homologation. Competitors only have five upgrade tokens in the first two years. Only two of them are for safety or reliability reasons. And then there are five more in the next two years.

In September 2017 were the car’s first road tests. Then the project team began work testing the car in a wide range of conditions. 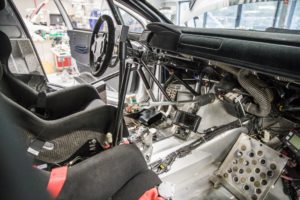 It also had tests in the east (Vosges) and south (Tarn) of mainland France. The car also had its first outing in a competitive setting as one of the zero cars at the Rallye du Var in November of last year, driven by Yoann Bonato.

Meanwhile, work continued on the version intended for use on gravel – the most common surface in the WRC. There were sessions on gravel roads in Fontjoncouse, near Narbonne, Cardona in Spain and Mazamet, to the north of Carcassonne. Six thousand kilometres of testing later, Citroen Racing presented an accomplished product. Its development will continue with fine-tuning on some very specific surfaces. There is a schedule for further test sessions later this year. 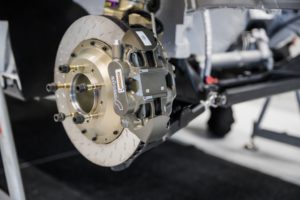 “We set ourselves some very ambitious targets,” explained Olivier Maroselli, the project manager.

“Targets that we have met by working in three major areas. First of all, reliability and heat management with all the internal parts of the engine, which proved to be very sophisticated. We also paid very special attention to the cylinder head. [That was] to increase permeability as much as possible on the intake and exhaust ducts. The last major area of development was the car’s electronics. [Now there is] a more advanced ECU than what we have had in the past. On the one hand, the purpose of this was to have a much more functional anti-lag system and therefore get a much better response from the accelerator during in-gear acceleration. But the idea was also to be constantly as close to the maximum authorised booster pressure, without opening the pop-off valve, which always has a highly detrimental effect on power.”

“All of this means that the engine is now undoubtedly one of the car’s major strengths. All the drivers were in agreement that the car has bags of torque. But we also know that it is also well placed in terms of power, with a higher rating than its rivals.” 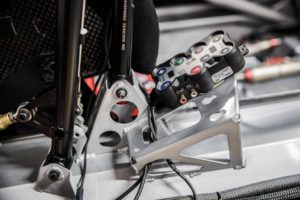 The C3 R5 has – like its famous big sister, the WRC – a Sadev gearbox

However, the similarities end there. The base model for the C3 R5 had a special design for the specific requirements and constraints of the category. “It’s a question of safety, really,” commented Olivier Maroselli. “Some of the internal components are familiar, and therefore tried and tested. We nonetheless chose to design our own architecture. Our packaging is different in terms of both the width and the height of the gearbox outlets. This is because they have a direct influence on the transmission angles, and therefore the maximum travel allowed. We, therefore, paid very special attention to this point.” 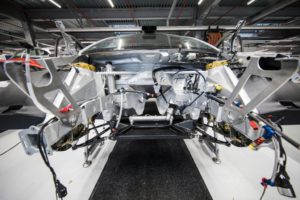 Like its big sister, the C3 WRC, the C3 R5 has two different front suspension geometries

That depends on whether the specification is for tarmac or gravel. The idea is, in each situation, to optimise both versions of Citroen’s new model.

“As the number of interfaces authorised between the hub carrier, the strut, the suspension arm and the toe rod are very limited, this was no mean feat,” explained Maroselli. “But we chose to incline the strut towards the rear on tarmac, for the purposes of kinematics, and towards the front on gravel, mainly to do with travel. This is another of the car’s strengths because we didn’t have to compromise on the designs chosen at all.”

“We were also determined to ensure all of these parts were at the minimum weight. This involved using Reiger shock absorbers. Not only are they very fine-looking products, which provide plenty of room for manoeuvre when it comes to defining the appropriate set-up. But their aluminium struts also helped us to keep the weight down.” 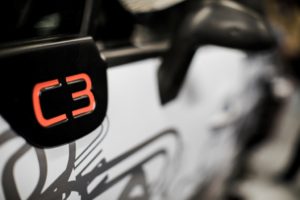 Citroen Racing made efforts to ensure the best possible maintenance conditions for the C3 R5, whilst also paying special attention to the durability of the parts selected

“Yes, this was clearly one of the areas we worked on, without however compromising on performance,” admitted Olivier Maroselli.

He went on to explain that removal of the gearbox at the front end is very easy. The team also made a lot of progress on the bodywork, by investing in multi-material technology.

“So that there are rubberized components in all the lower parts of the bumpers and in some areas on the wings. They are therefore more resistant to wear and distortion. Similarly, we covered a lot of miles in tests on really rough gravel surfaces such as at Fontjoncouse, and we noted a vast improvement in the ageing of the body and all of the subframe. Damage to consumable parts, like the protective skidplate, is at a really very good level and that is undoubtedly a plus for running costs.”

The start of our @CitroenRacing #WRC2 programme is getting closer! We’ll first be present at @TourdeCorseWRC, @rallydeportugal & @Rally_d_Italia. Then the team will decide for the next ones… pic.twitter.com/mnI7niyF2P