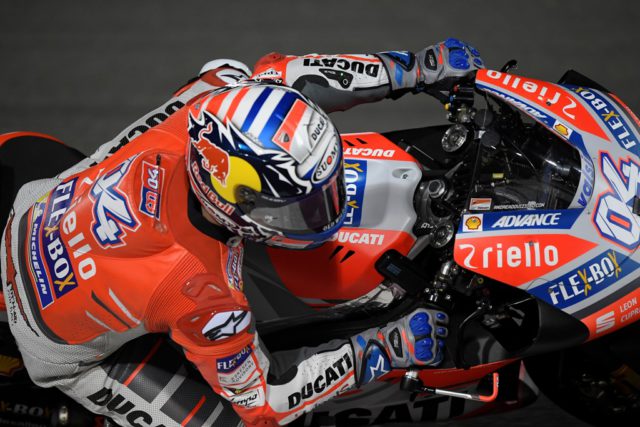 The results of the first race of the season ⬇️

Andrea Dovizioso won the Qatar Grand prix, first round of the 2018 MotoGP championship

The Ducati Team’s Italian rider started from row 2. He was unable to get a good start when the lights went out and he crossed the line at the end of the opening lap in seventh place. Dovizioso then moved up into the leading group, battling with Marquez, Rossi and Johann Zarco. He took over at the front on lap 18, followed closely by the Spanish rider who tried an attack at the final curve. Andrea got through on the inside and crossed the line 0.027s ahead of his Honda rival.

Thanks to the win Dovizioso has overtaken Loris Capirossi in the list of most victorious Ducati riders in MotoGP. He has eight wins to his name. Now Dovizioso is in second place in this particular ranking behind Casey Stoner.

A group of seven riders, split by just over one second, fought for a podium position for almost the entire race.

“It was a fantastic race! MotoGP is getting better and better because there are a lot of really competitive riders. But here at Losail our bike was in great shape and was really fast. Andrea rode so well, despite a bit of a difficult start. And by now he’s demonstrating he has an extraordinary racing maturity and great confidence in his bike, which allowed him to manage the race perfectly. Marquez and Rossi were also great today, but DesmoDovi had just that little bit more”, said the CEO of Ducati Claudio Domenicali.

Ross Brawn: Simplicity is a key objective for the future

Fernando Alonso: Being able to keep the car in the top 10 was a...