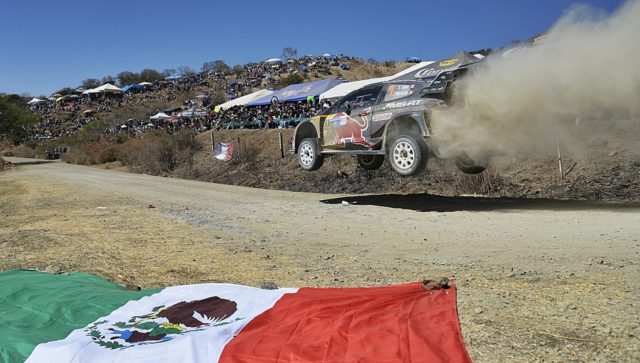 Sébastien Ogier and Julien Ingrassia have delivered a stunning drive at Rally Mexico, turning fifth place and a 31-second deficit into first place and a 35.9-second advantage at the end of day two.

Taking advantage of his slightly improved road position, Ogier was the man to beat on Saturday. Setting four fastest stage times, he was never out of the top-two fastest times on gravel and is on course to deliver another fantastic result for the EcoBoost-powered Ford Fiesta WRC.

“I am very happy to be in the lead at the end of the day. Our starting position was a bit better in the morning and in the afternoon there was no cleaning left to do which is where we were able to make the biggest difference. We wanted to push – and I was pretty much on the limit most of the time – but we had a good feeling in the car”, Ogier explained.

“We didn’t always have a perfect run, but I was really happy with the morning loop where I made very few mistakes – especially in the second and third stages [SS12 and SS13] which were almost perfect.

“It was a bit tougher in the afternoon – still very slippery and very hot inside the car and for the engine and the brakes as well. It wasn’t an easy loop, but everything worked well and we can be really happy with the job we have done so far.”

“Unfortunately I think someone in front hit a dog but I saved a second one. I nearly went off and lost a bit of time but I had to otherwise I would have lost my marriage!” @AndreaKaiser

“It’s been a perfect day, I pushed as hard as I could and we can be very happy with what we’ve done today. I like a lot this stage. It’s quite slippy now because we have a lot of tyre wear, and with the gap I have I didn’t push completely, but it’s a beautiful one”

Sébastien Ogier and Julien Ingrassia have delivered a stunning drive at Rally Mexico, turning fifth place and a 31-second deficit into first place and a 35.9-second advantage at the end of day two

“I could sense at lunchtime that there was a glint in his eye and that he was really going to attack. That’s what he did and he’s ended up with a 35.9 second lead at the end of the day”, he continued.

“It was a truly incredible drive – just Sébastien and Julien [Ingrassia] at their absolute best. There are still three very demanding stages to go, and anything can happen, but I have no doubt in Sébastien’s ability to deliver. The pressure is on us now and we need to ensure that he and Julien have everything they need to secure the result.”

Magnussen: 7th is a pole position in the ‘B’ championship