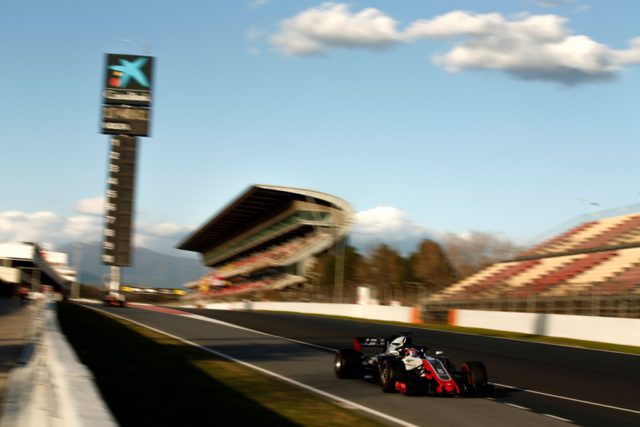 Romain Grosjean set a new preseason testing benchmark for Haas F1 Team with 181 laps completed on the final day of testing Friday at Circuit de Barcelona – Catalunya. It was also the highest lap count of the day among the 12 drivers who took to the 4.655-kilometer (2.892-mile), 16-turn track. Force India’s Esteban Ocon was next best with 163 laps, 18 laps shy of Grosjean’s mark.

Grosjean’s teammate, Kevin Magnussen, set the team’s previous best single-day total of 153 laps on Thursday. Prior to this year’s winter test, the highest single-day lap tally of any Haas F1 Team driver during preseason testing was 119 laps by Grosjean, set one year ago.

In addition to the number of laps run, Grosjean displayed speed. His quick time of 1:18.412 placed him fifth overall. It was earned on his 87th tour with his Haas VF-18 riding on Pirelli P Zero Purple ultrasoft tires. Ferrari’s Kimi Raikkonen set the day’s quickest time (1:17.221).

“It’s been brilliant. We did a lot of work with the car, which is really good. I managed to get a lot of laps in on the last day, which we missed earlier on in the test. The team did a great job. We’ve got a lot of knowledge now for Melbourne. I’m looking forward to being there”, Grosjean commented.

“I think we got as much out of the last two days as we could. [On Friday] we got a race distance in during the morning and another one in the afternoon. That’s what you want. The more you run, the more you learn”, team principal Guenther Steiner added.

Thierry Neuville leads at the end of Rally Sweden Day 1