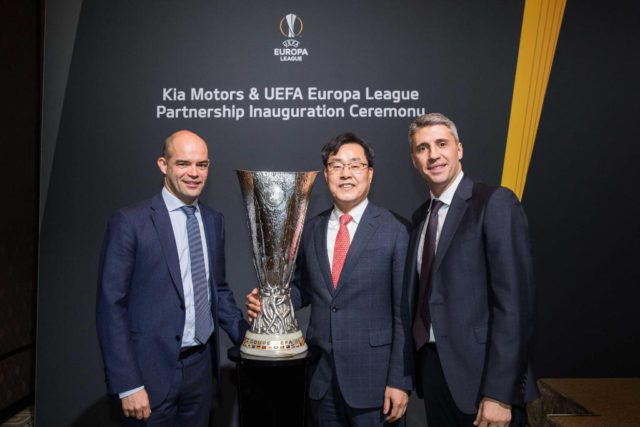 The UEFA Europa League is the world’s largest professional club football competition, involving 48 clubs from 55 countries across Europe. The tournament attracts a global cumulative TV audience of 1 billion across all programming. As Official Partner, Kia Motors will supply a fleet of 90 vehicles in 2019, 2020 and 2021. The fleet will be used to transport referees, officials, delegates and VIPs.

205 young football fans across Europe will be Official Match Ball Carrier. They will share the excitement of the tournament throughout the season by entering a competition. Kia will use its global network of digital marketing channels to extend the League experience beyond the European region. This way the brand will bring the action closer to football fans around the world.

Kia Motors Senior Vice President Yong-Won Cho commented the agreement is the continuation of an already long existing link. Mr. Cho, who is also Chief Marketing Officer, added this is a platform from which to engage more closely with fans all over the globe. This way Kia will be able to enhance the brand’s visibility.

“We are soon to embark on our first full season in partnership with Kia Motors for the UEFA Europa League. The competition also features football players from every corner of the world. So we are looking forward to working together with Kia to build mass fan engagement.”

“Together we will create the first global UEFA Europe League Trophy Tour presented by Kia. Each season the competition reaches a television audience of one billion viewers, 45 percent of which live outside of Europe, so we value partners such as Kia Motors that have such a great reach. Today we officially welcome Kia Motors into the UEFA Europa League commercial partner family for the 2018-2021 cycle and look forward to working together to promote the competition.”

“I am a huge fan of the UEFA Europa League. I have fantastic memories of playing in the competition and even lifting the iconic trophy in 1999. The competition goes from strength to strength and now with the support of Kia Motors, this is something that can only continue to accelerate.”

The 2018/19 season tournament group stage will commence on September 20 2018, while the knock-out stage will start on 14 February 2019. The final will be held at Baku’s Olympic Stadium on 29 May 2019. There Kia will roll-out various activities to generate excitement and give unique experiences to football fans around the world.

The UEFA Europa League exists since 1971. The tournament was known as the UEFA Cup and it went a rebranding process in 2009 while also changing its format.

28 different clubs have won the title, 12 of which have won it more than once. The most successful club in the competition is Sevilla with five titles while the current champion is Manchester United. The English club defeated Ajax to win the 2016-2017 tournament.  There are three clubs with three titles each – Inter, Juventus and Liverpool while 8 have won it twice – among them Borussia Monchengladbach, Real Madrid, Feyenoord. Tottenham was the inaugural champion for the 1971-1972 Cup.

The New #KiaOptima #Sportswagon is here to impress, sure to make a statement on the road with its upgraded power and sophisticated design. #Kia #Optima #GimsSwiss #GIMS2018 pic.twitter.com/zwgM89pMoE

Fernando Alonso: It’ll be interesting to see how the cars cope on the newly-resurfaced...

Marquez on THAT Assen win: It was crazy!