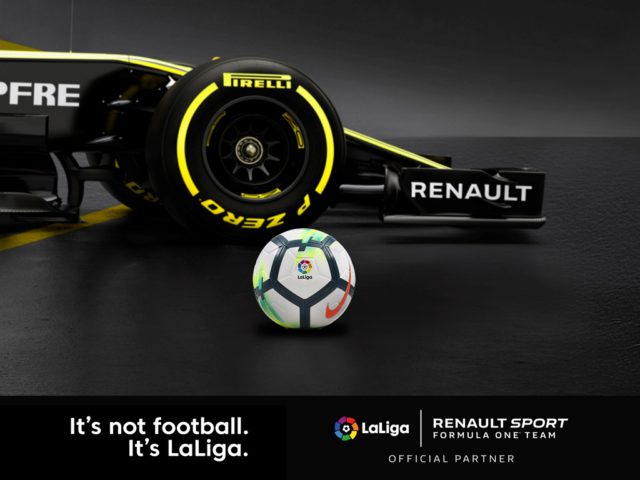 The new partnership between the Formula 1 team and the premier Spanish football league joins two spectacular sporting worlds. It will allow fans access to multi-layered sports entertainment across multiple platforms.

The football championship logo will be visible on the team’s latest car as well as on the overalls of Nico Hulkenberg and Carlos Sainz.

The new partnership is part of the Spanish league’s strategy to expand its brand internationally and fits with the league’s initiative to support other sports and athletes. For example, through LaLiga4Sports the Spanish league currently supports Javier Fernandez, the Spanish Olympic bronze medallist figure skater, and badminton champion Carolina Marin. It has also supported the Davis Cup tennis tournament and tennis star Rafael Nadal.

“We are very happy to announce this exciting and unique partnership with LaLiga, one of the world’s best football divisions. Renault Sport Formula One Team and LaLiga have many shared goals as we push to expand our reach worldwide. Between the Formula 1 and LaLiga seasons, we cover the entire year and there are cross-overs in our two fan bases that will be the springboard for exciting activities.”

“We have been looking for innovative ideas that allow us to generate brand presence internationally and support our brand positioning ‘It’s not football. It’s LaLiga.’ Motorsports and specifically Formula 1 fits perfectly with this strategy. Formula 1 fans are potential football fans. This new, year-long relationship is designed to further expand the LaLiga audience and grow awareness for our brand.”

Perez: The Bahrain layout really allows you to race wheel-to-wheel at times

Alex Tai: The result in Santiago did not reflect DS Virgin’s pace

Perez: It is fair there is no number one driver in Force India